Home Explorations The Art of Craft Creators, innovators and a meaningful trip – Part 1

The meaning of a trip is not measured by distance or duration. The true significance of a meaningful trip lies in the difference it makes in your life long after you return.

The contest was simple: for any and all creators and innovators, create an object made from recycled materials that could be used to ride a wave. Vissla, the surf apparel company sponsoring the contest, provided a deadline, a vague reference to prizes and some brief guidelines regarding posting your submission on Instagram. That was all they stated.

So began the journey.

Some trips are discrete entities in themselves. They have a clear beginning and end. You go, you come back. End of story.

Other journeys consist of multiple ventures, a collection of small trips we may not even think of as being part of a larger narrative until later when we look back and realize the inter-connectedness of the adventure.

Connor’s journey began not with a meaningful trip but with a series of short forays into an industrial park a 15-minute drive from our home. His objective: obtain a number of wooden pallets that could be foraged to produce a small surfboard, a paipo to be precise, more like a wooden version of a Boogie Board. He found the appropriate pallets, dissected them, harvested the best parts and created a small wonder. 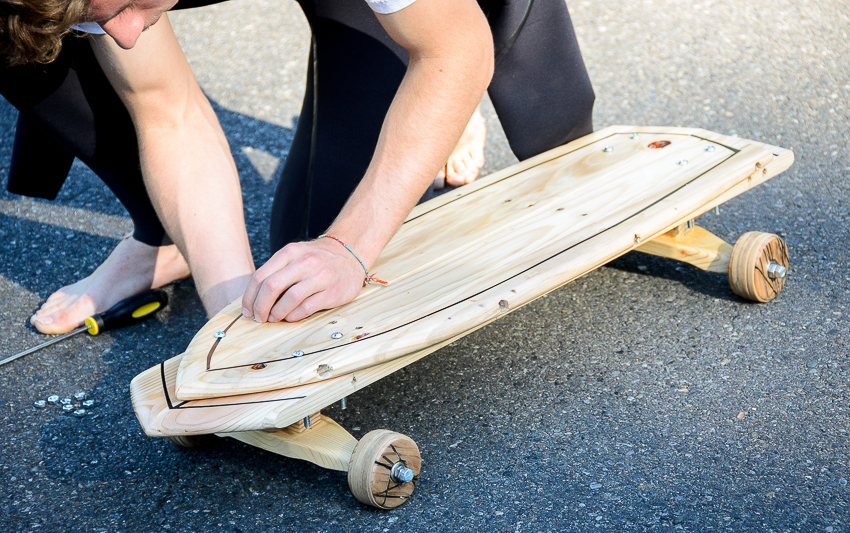 Not content to make a common paipo, Connor spent weeks working out the details for an innovative approach to his board. His vision was a surf and turf affair: A longboard complete with wooden wheels and trucks (the supporting pieces that hold the axels) which converted to a paipo. Ride it to the beach, pop off the wheels, unfold the top, tighten the bolts and out into the waves you go. Brilliant. At least in theory.

The second small trip occurred when Connor needed to test out his creation and video it for the Creators and Innovators competition submission. We live in the Seattle area. And yes, you can surf in the Seattle area. You just need to wait for a large container ship to sail down the Puget Sound so you catch the waves of its wake. Seriously. Some people do that. For the rest of us, we head a few hours south and west to the Pacific Coast. 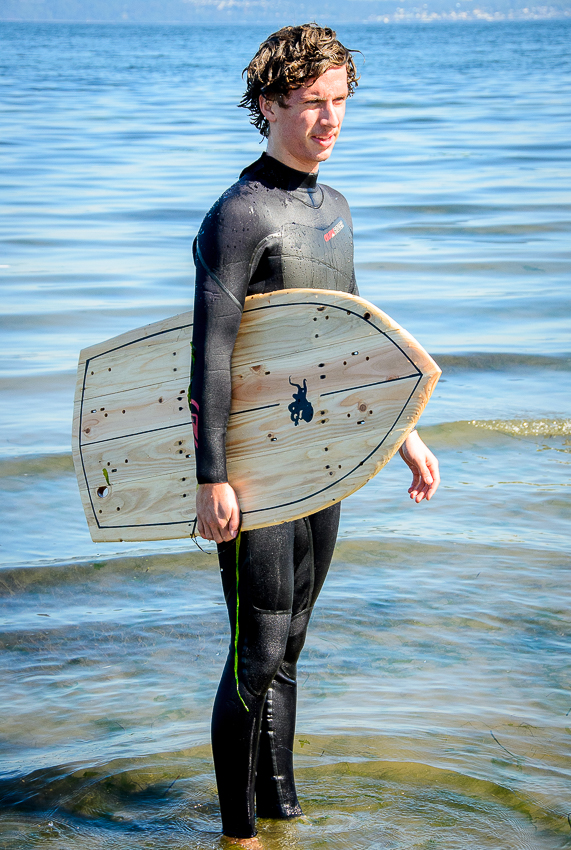 On the morning the day before the contest submission was due, Connor headed out to the beach with me in tow (after all, he needed a cameraman to record his test). We didn’t get far before the math set in: This was a Friday. I had a conference call at 2:00 p.m. Given a later departure than planned, we’d have about 25 minutes once we arrived at the beach for Connor to don his wetsuit, put together the longboard, ride and video that, convert it to the paipo and then video him surfing on it. Not enough time we realized. Enter Plan B.

Instead of the ocean, we headed to a beach on the Puget Sound less than a half hour from home. Connor got his wetsuit on, assembled the board and then – Action! I videoed as he rode the board about 20 feet in the beach parking lot and then…snap. One of his wooden trucks broke. Thankfully, we had enough video for the submission (and Connor later made a design change to improve the truck). I then filmed him walking to the beach, converting the longboard into a paipo and heading out into the water.

The problem was, the Puget Sound makes a great harbor precisely because it rarely gets large waves. No worries. I filmed Connor as he paddled and splashed furiously in the water. It may not work as a scene from Endless Summer but it was enough. We had what we needed.

He edited the footage and made the submission in time. You can see the more detailed version of his video below. “Octo,” by the way, is the name he gave it based on the octopus graphic he created for the board.

And then he waited.

Until the day he received an email.