Passion doesn’t always arrive in the ways you expect.

After a day touring through quaint villages and lonely byways of England’s Cotswolds region, we were ready for a relaxing evening at our inn, The Village Pub in Barnsley. Yet as we turned into the inn’s parking lot, we had to negotiate our way around an unfamiliar object. 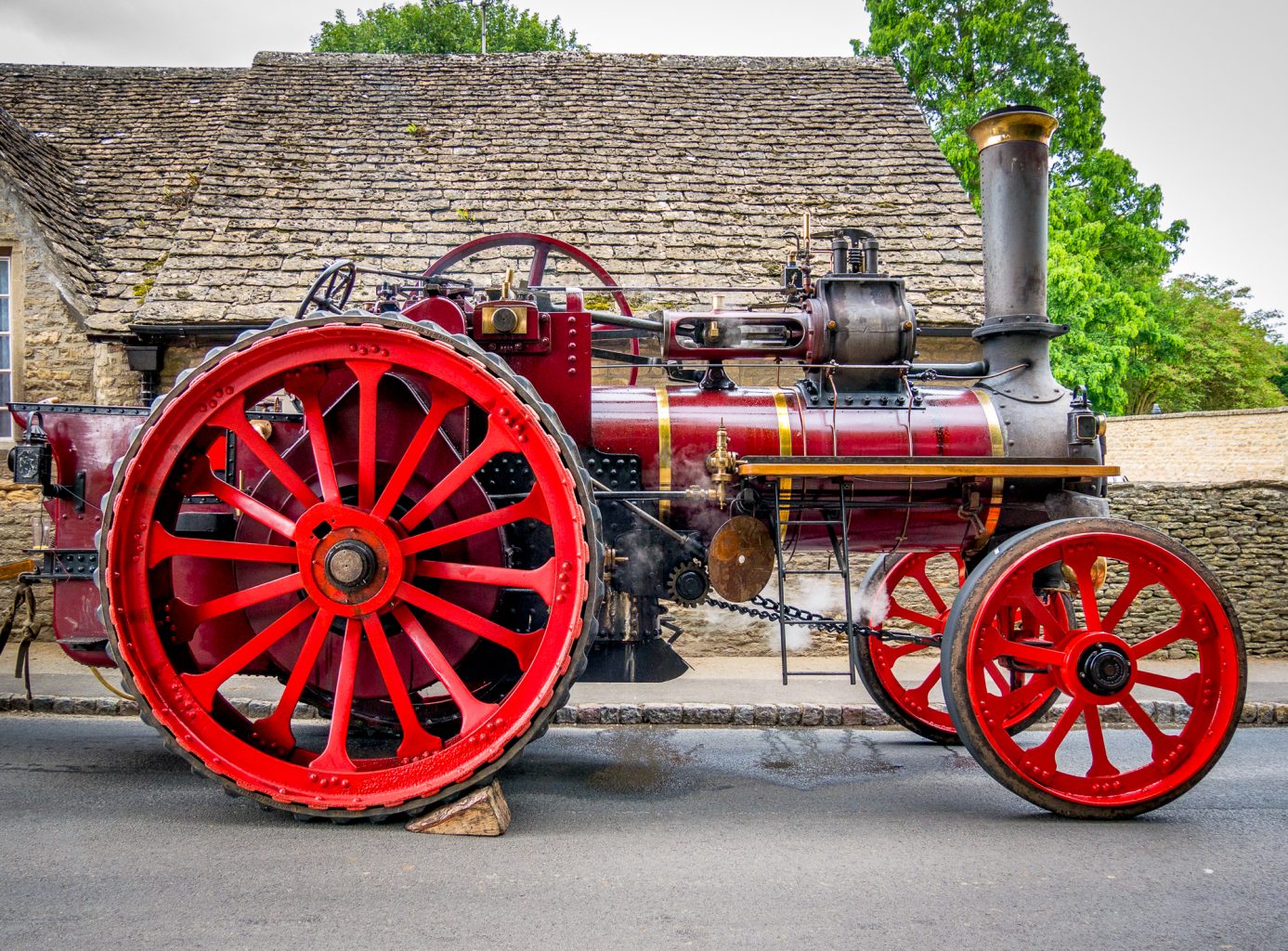 There, in splendid redness on the side of the road, amidst the low rumble of its engine and the vapor spewing from multiple vents and seams sat a steam engine. The image above will explain far better than I can. Apart from museums or books, I’d never beheld such a machine before, at least on this scale. 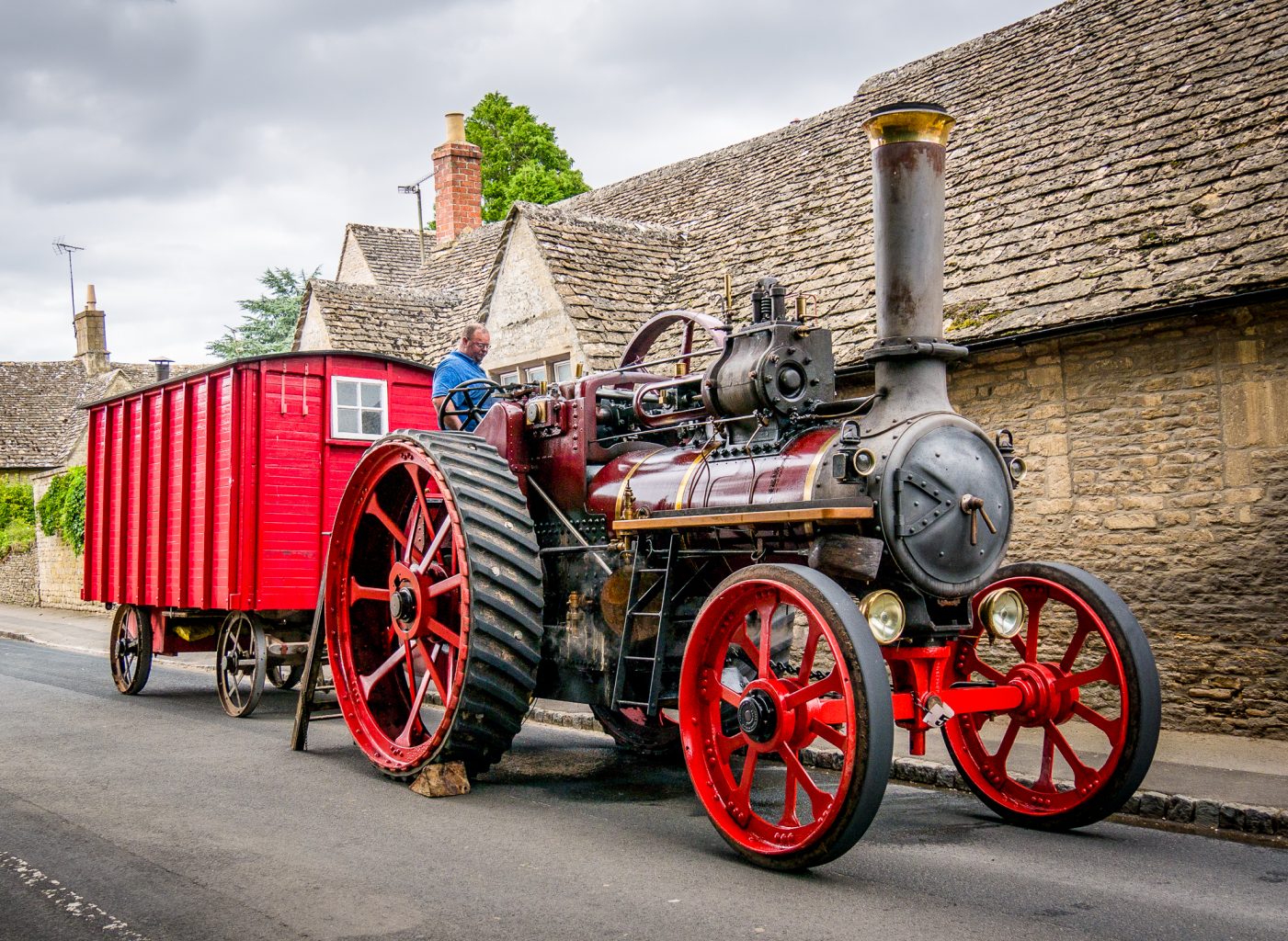 When I was a kid, I dreamed of making a model steam engine, but even though the versions I saw were far less ambitious than this one (the models were stationary and about six inches long), the cost and complexity exceeded my paper route income and tween metalworking skills. I was fascinated then by the very elements that made this behemoth so wondrous: intricate metal parts and fittings combined with the heft of huge iron and steel components. Each rear wheel likely weighed more than my car. 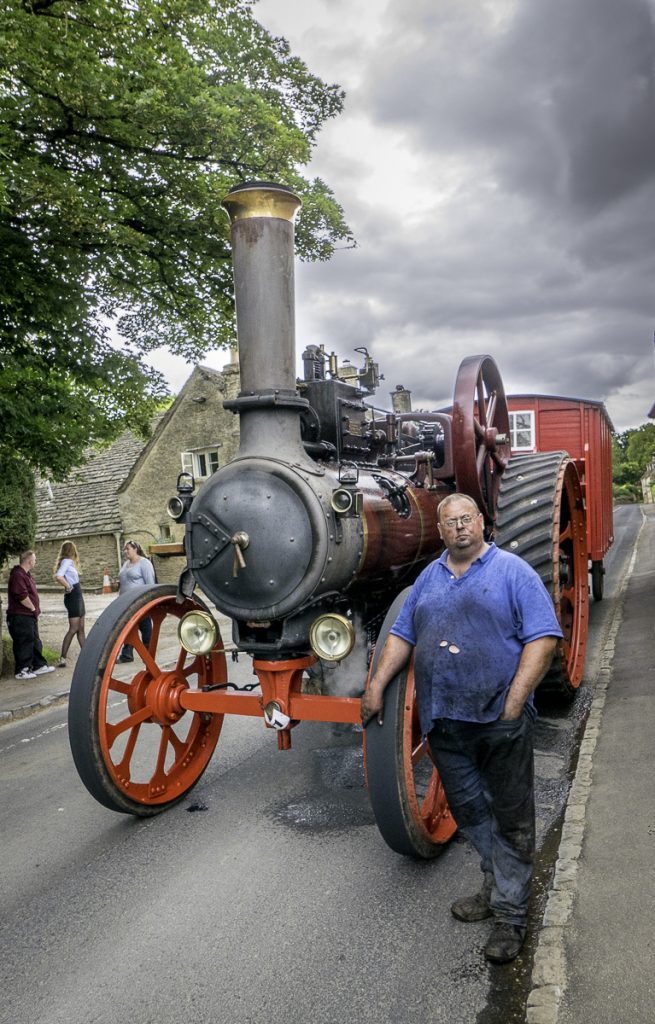 I approached the man clamoring over the vehicle and, unable to articulate any coherent specific question, said simply, “Tell me the story here.” He came over, arms and hands blackened with grease.

His name was Chris Larson. He and his wife, who was busy talking to an inquisitive server from the inn, were on their way to a steam festival down the road. They’d stopped at the inn for dinner since at four miles per hour, theirs had been a long journey from central Dorset county. It was a drive I would make in 90 minutes the next day but one that had taken them most of two days to accomplish.

When he mentioned a steam festival, my naive response was, “You mean there are more of these machines out there?” Indeed, there are. Over a hundred steam engines would be at this festival and there were dozens of these festivals across the country. An entire sub-culture of steam engine enthusiasts existed. 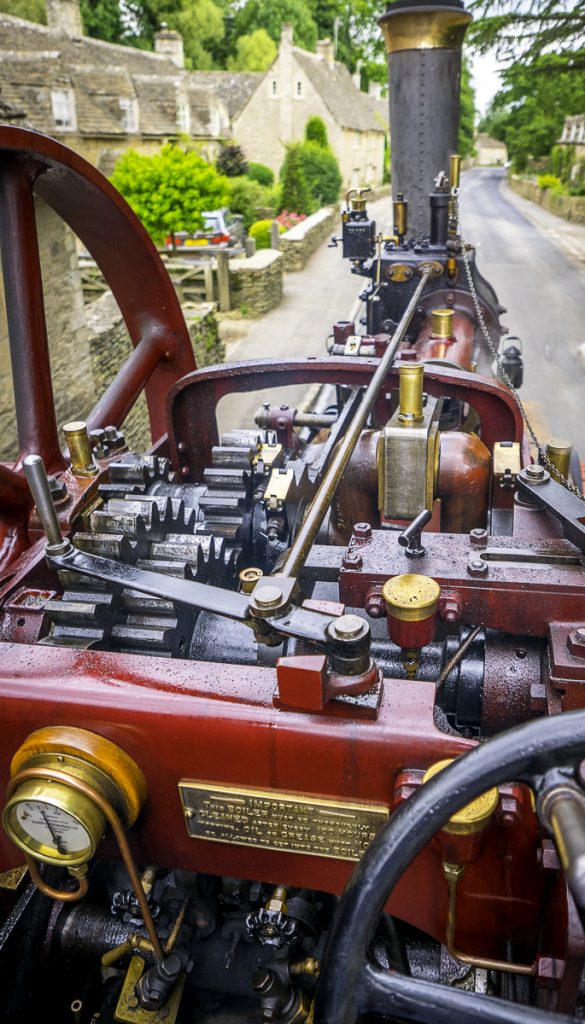 Chris invited me up into the driver’s area. We had to use a ladder propped against the rear wheel to do this. He showed me how he fed coal into the furnace and explained how he’d made this giant beast of a vehicle practically from scratch. He whipped out his phone (a rather anachronistic moment standing in a century-old vehicle using a 21st century mobile device) and showed me photos of the initial pieces he’d bought: part of the engine block, elements of a wheel and a few other odds and ends. My guess is that all of those original components amounted to at best 20-30% of this final vehicle. That meant he’d machined, forged, manufactured, scavenged and assembled all the rest on his own. Amazing.

Eventually, I had to let him go dine with his wife. I wondered how he was going to clean up those greasy arms for the rather upscale pub dining room. But the two of them ate outside on the patio and I left them to enjoy their meal in private. 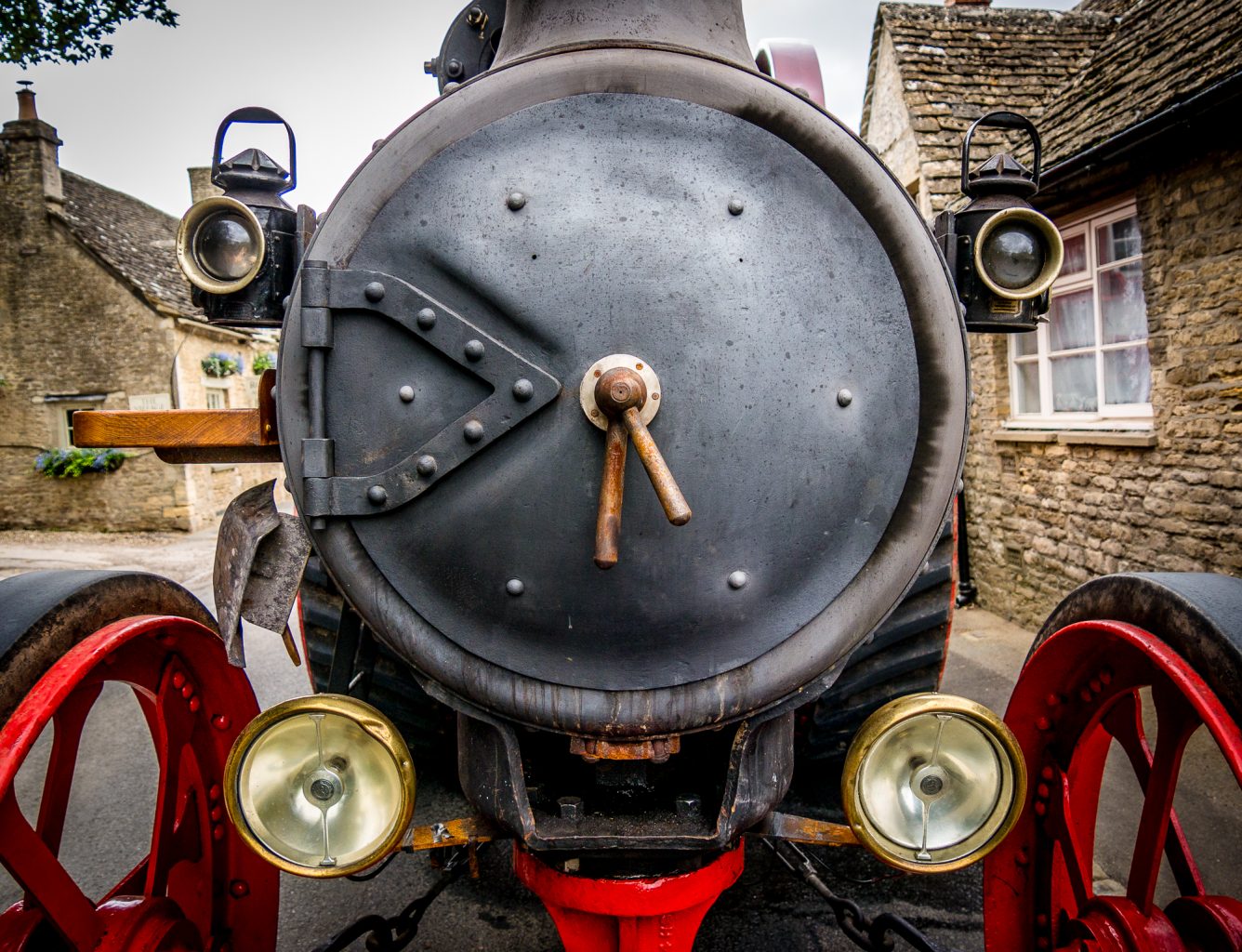 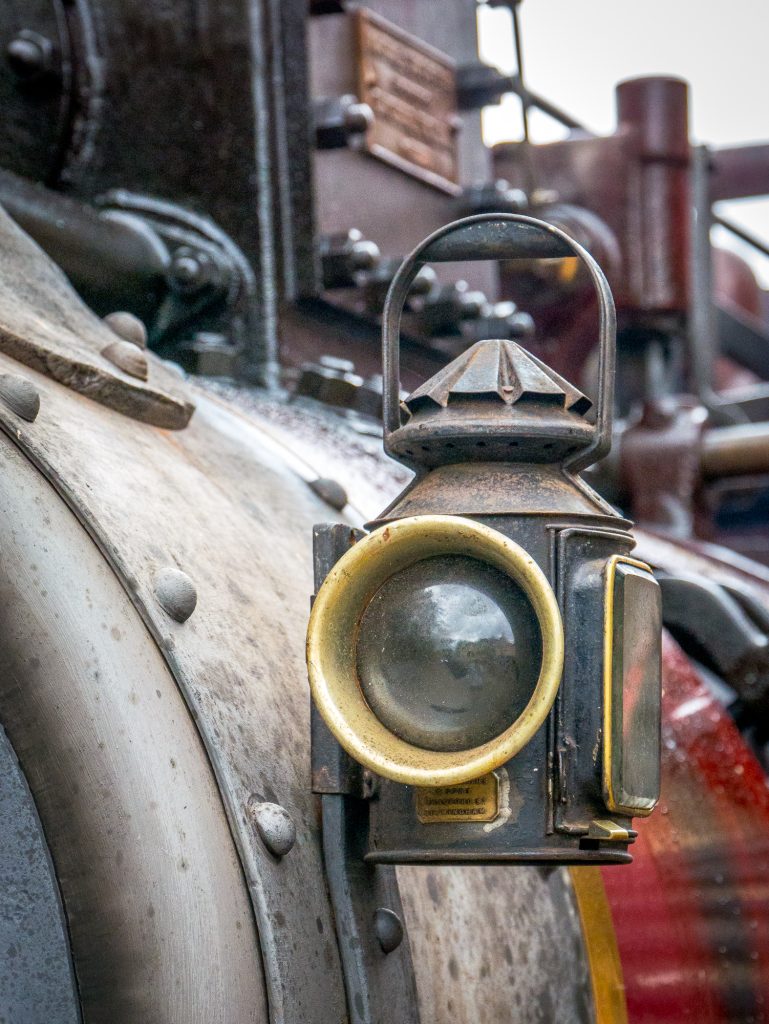 Besides the marvel of encountering something so unexpected, seeing Chris’s steam engine and all the associations, memories and nostalgic longings it evoked made me realize something.

Chris had found his passion. He’d dedicated untold hours and a good deal of expense, I’m sure, in building that steam engine. Now, as he tours the various steam festivals, he can show off his work to wonder-eyed kids of all ages – like me. He’s able to connect with others who share that passion or are awakened to one they never realized they had. He, in short, lives in a world consumed by what brings him joy.

Before we turned into the inn’s parking lot, I didn’t know that any such steam engines still existed, especially in such great working order. So it makes me wonder: What else might be out there that grabs my heart? My passion? I’m not planning on building my own steam engine any time soon. But it delights me to know there are others that are.

It brings me a deep sense of gladness to realize this world is filled with people who do follow their dreams. Who take their passion seriously. Who tackle seemingly insurmountable challenges to bring to life what others don’t even imagine as possible. Who then find similar dreamers and doers who support, encourage and help them to carry on. 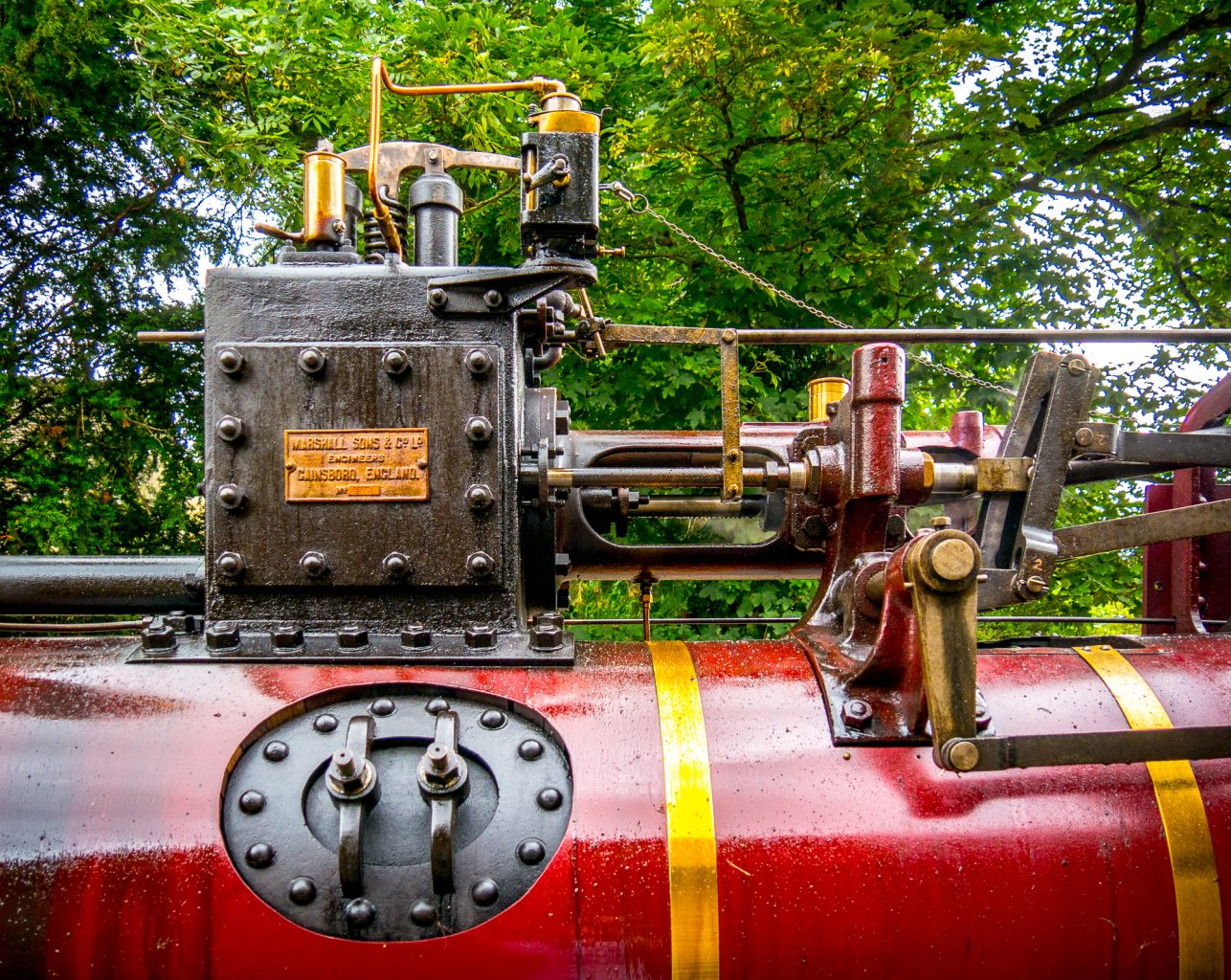 I’m inspired to build, to make, to create. I’m not sure what it will be yet. But like that moment when I first saw Chris’s steam engine, I expect it will come on almost like magic.

Tips for connecting your passions to your trip

Sometimes, trips reveal moments of inspiration that connect your inner and outer worlds. These moments, like my time with Chris and his steam engine, can evoke buried emotions and inspire you to do something new. But you don’t have to wait for those magic moments. You can pursue them. To help you do that, try these for your next trip:

What hobbies or new creative interests have you indulged in or discovered on a trip?