Chiusa and the serendipity of travel

Discovering some unknown (to you) place on your own is one of the great joys of travel. No one has recommended it to you, guidebooks may barely mention it and yet, once there, you wonder, “Why have I never heard of this place before?”

Most people head to the Dolomites – that craggy region of northern Italy – to hike amid its jagged peaks in the summer or to ski in winter. But throughout the region lie many charming towns and villages that deserve a closer look. One such place is the small artists’ town of Chiusa (Klausen in German). In much of this area known as South Tyrol, more people speak German than Italian since prior to WWI, this region was part of the Austro-Hungarian empire.

Chiusa lies about 18 km (12 miles) north of the larger city of Bolzano, or 60 km (40 miles) south of the Austrian border. But this combination of Italian and Germanic influences gives Chiusa its distinct character. You may never have heard of it before and you could cover the highlights of Chiusa on a short visit as you’re passing through the region (it’s conveniently right off of the autostrada. You can see an elevated section of the freeway to the rear of the photo above). But spend a bit more time to linger and wander and the wonders of this lovely town begin to reveal themselves.

As you enter town, look for the signs to the “Altstadt” (old city in German) or city center. Just driving through on the main road will leave you wondering about those castle-looking buildings on the hill, but otherwise underwhelmed. You have to make your way to the small central area and begin exploring to discover the full beauty of this place.

If you arrive on a Sunday, as we did, you’ll find most of the shops closed. But you can still enjoy a meal at one of the restaurants or cafes that line the town square. You may be fortunate enough, as we were, to come upon a wedding outside the town’s main church, the Chiesa di Sant’Andrea, where you’ll behold a choir in traditional garb sing a beautiful song a cappella to the attendees.

On a weekday, if you like to shop, you’ll find a wealth of intriguing boutiques and quaint stores along the main street selling handmade wares and locally crafted gifts. Chiusa has always been a town that attracted creative types, especially poets and artists such as Albrect Duerer who is said to have visited and sketched the city in 1494.

The town invites exploration so after strolling along the main streets, wend your way through narrow passages, eventually ascending a set of stone steps that mark the start of the Via Cruxis, the Way of the Cross, up the hillside behind the town.

Along the way you’ll pass by works of religious art set in small shrines that mark the way, and mostly, fields of grapes. Vineyards line many of the surrounding hills. Visit in the fall and you’ll see plump clusters of grapes dangling in the sun along the entire route.

The small castle seen from below, Branzoll Castle, is privately owned (nice digs) and thus not open to the public. So continue up the hill, stopping frequently to take in views of Chiusa and the valley below you.

Eventually you’ll approach the top of the rocky outcropping on which sits the Sabiona (or Saeben, in German) Monastery, one of the oldest pilgrimage sites in the region.

A building of some kind has been on this site for over a thousand years. However, it wasn’t until the late 17th century that it became a Benedictine monastery. Shortly after that, it turned into a convent. A few nuns still reside there, but they stay mostly out of sight in private areas.

That frees you to explore the first courtyard which contains a cistern with potable water above which stands a modern bronze relief. Pop into the chapel then, after paralleling the monastery walls, pass through a tunnel to arrive at multilevel courtyard area near the top.

You don’t even have to knock

It’s easy to assume all the doors there are locked. Don’t. At the very top lies a foreboding black iron door. Open it and walk inside. 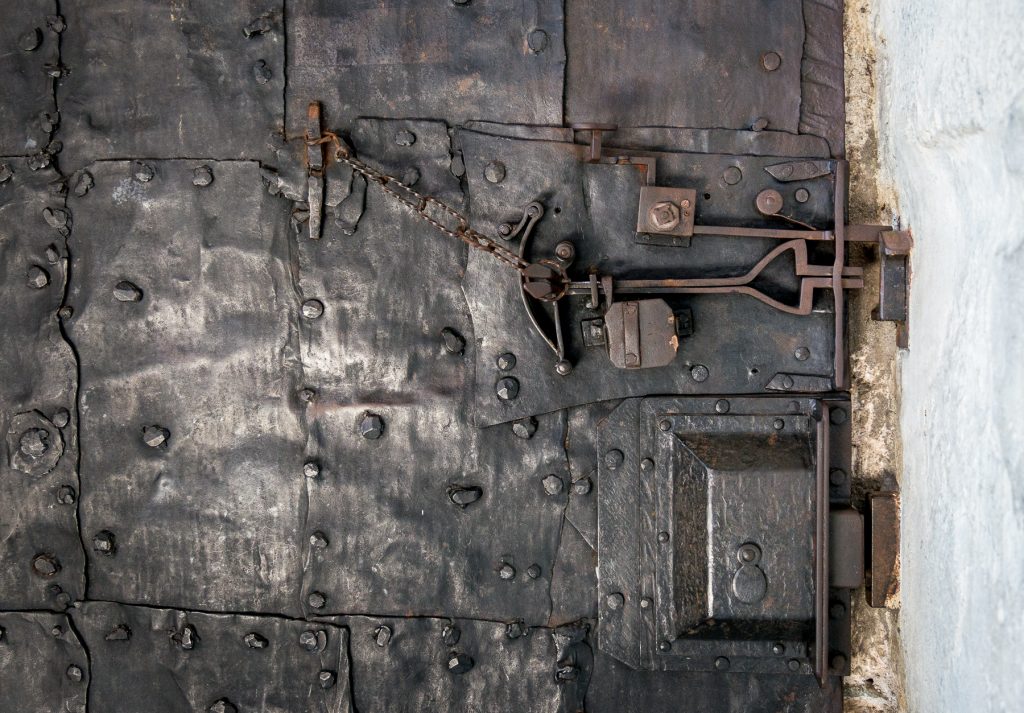 When you do, you’ll discover the largest of the four churches, the Church of the Holy Cross and its impressive frescoes. On a sunny afternoon, the interior fills with warm light and all the colors from the highly decorated walls and ceiling. You can spend a fair amount of time in the monastery just absorbing the quiet presence of the place. 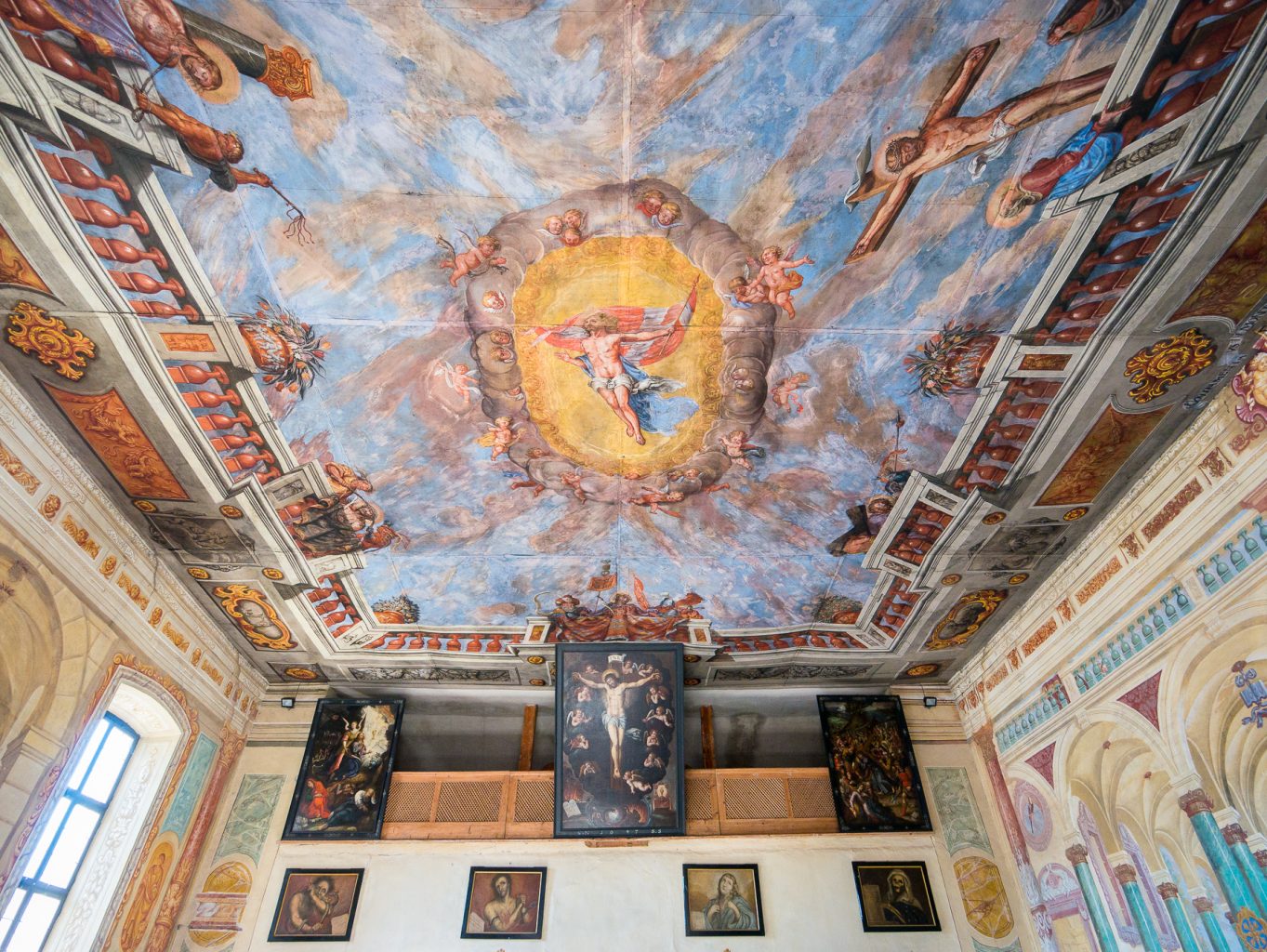 Contemplating beauty and the divine, however, can be parching work. Thus, once you’ve explored the nooks and crannies of the monastery, head back down the hill and follow signs through a vine tunnel that lead to the Restaurant Pizzeria Torgglkeller.

Pizzerias in this part of the world are as ubiquitous as fish and chips stands in the UK or poke places in Hawaii. If you don’t like pizza, your food options diminish significantly. However, you can try your luck at other choices inside sitting in one of the old wooden barrels to dine (see photo below) or head outside for a beer or a light snack.

Getting out of town

After relaxing, you can head out to one of several nearby valleys for stunning views of the surrounding mountains. A close and popular option is to visit Val di Funes (Villnoess Valley) to capture a quintessential Dolomites image, that of the church of Santa Maddalena (St. Magdalena) with the Odle mountain range in the background near sunset. 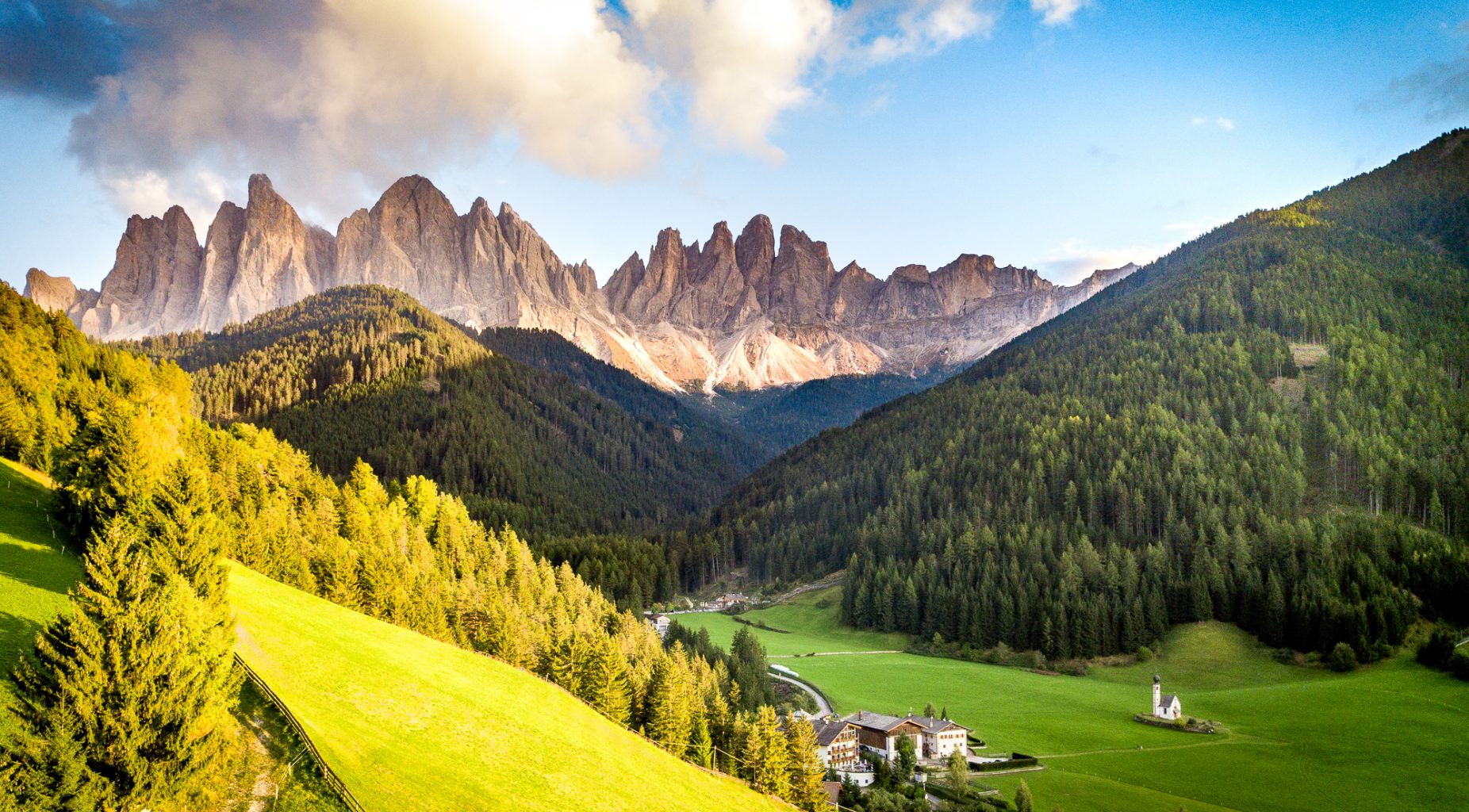 You can actually take a gondola (two, to be exact) up from nearby Ortisei to reach another often-photographed area of the Dolomites, Seceda, which sits at the top of this range.

Each of these lies only about a half hour drive away from Chiusa. In short, Chiusa makes a fantastic base for venturing into some of the most gorgeous areas of the Dolomites.

More surprises along the way

If you spend the night in Chiusa, you can dine at one of the many restaurants you walked by earlier. We had a surprisingly good dinner at Gassl Brau. You’ll recognize it for by the huge copper vats seen inside used for brewing their own beer. I had one of the best salads of our trip. Pizza I expected in northern Italy. Such a wonderfully fresh salad, no.

It was just one of the many unexpected aspects of Chiusa. We were there for three nights and we wished we’d had more. The best part is that other villages like neighboring Velturno (Feldthurns) and even the much larger city of Bressanone (Brixen, shown above) just north of there, all have their appeal. In short, a trip to the Dolomites doesn’t have to be just about the mountains and their trails. Visiting a small town like Chiusa allows you to have the best of all worlds: the adventure of mountain adventure along with the charm, comfort and romantic appeal of a beautiful European village.