A tale of two gorges 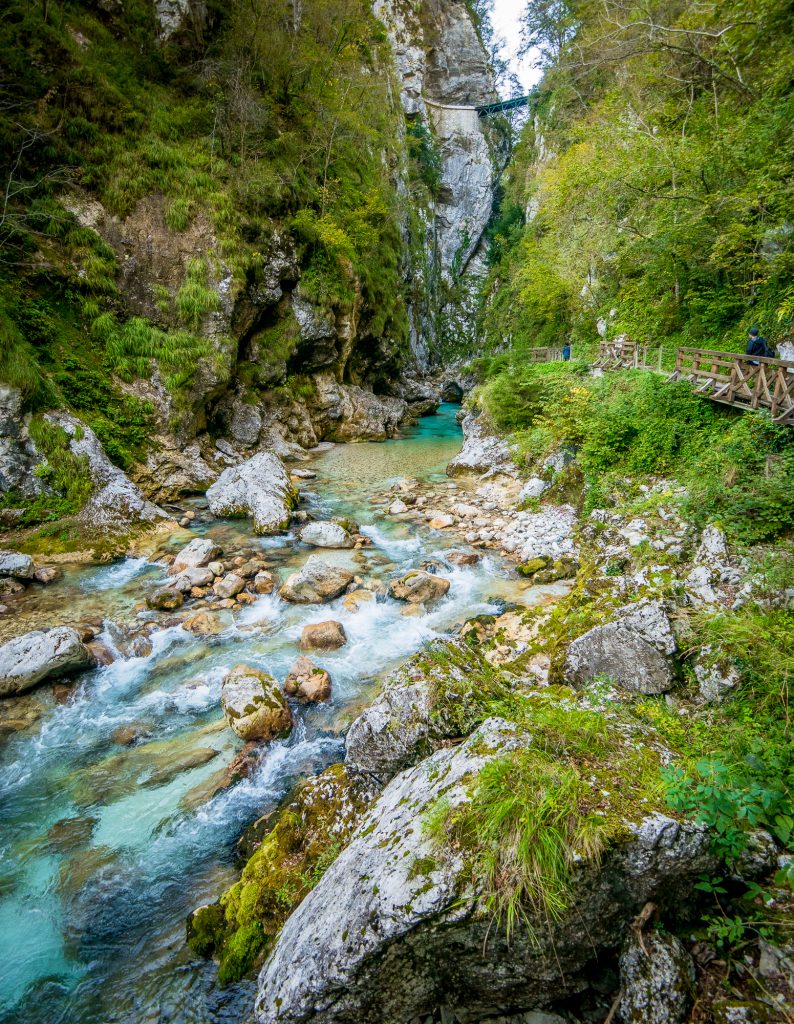 Slovenia is a beautiful country filled with some astonishing sights. The underlying limestone of much of the western part of the country creates magnificent scenery, particularly when rivers pass over this relatively soft rock, wearing it down into fantastical shapes and leaving mineral deposits in the water. This results in creeks and streams that flow in shades ranging from bright turquoise to a deep emerald green depending on the water’s depth, the angle and intensity of the sun and the cloud cover.

Some of the best places to observe this remarkable confluence of light, color, stone and water are in Slovenia’s many gorges.

In terms of seeing two of the most popular, the choice usually comes down to Tolmin Gorge versus Vintgar Gorge. 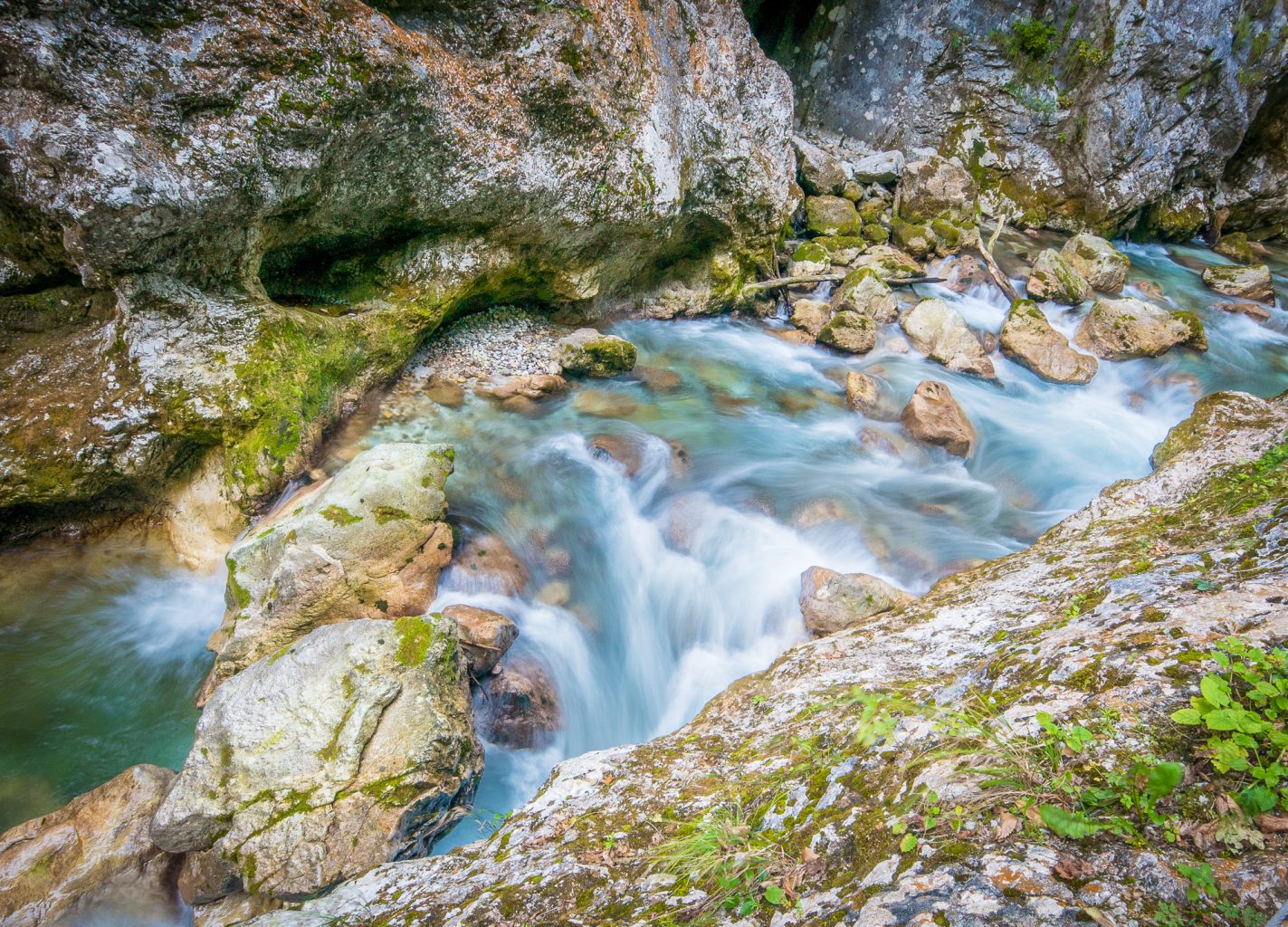 With both Tolmin Gorge (shown here) and Vintgar Gorge, you walk besides beautiful flowing rivers.

The latter lies just north of popular Lake Bled whereas Tolmin lies further west on the other side of the country’s largest body of stone, the Julian Alps. 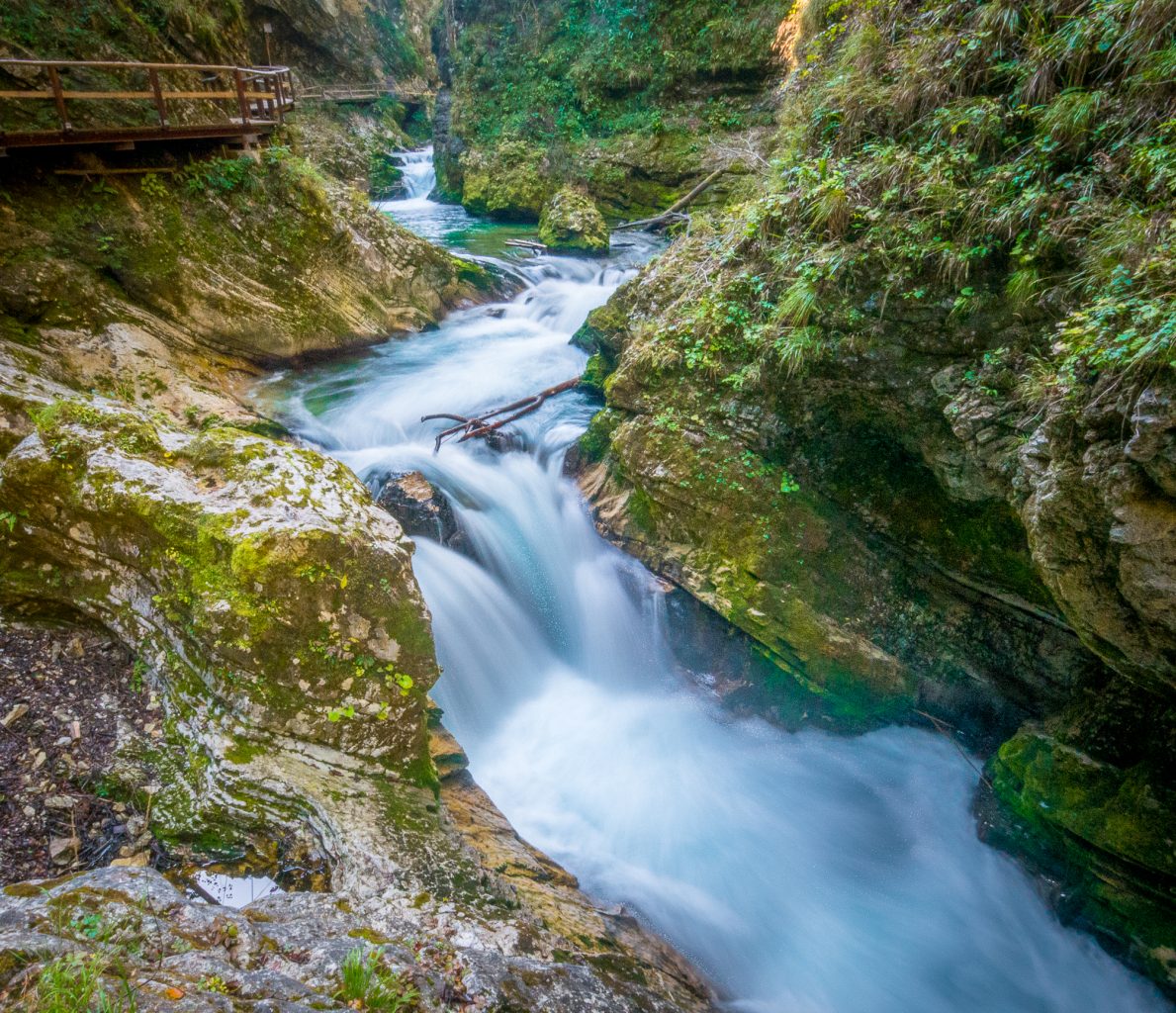 At Vintgar Gorge (shown here), you spend virtually your entire time beside the river. With Tolmin, there are several trails that take you up away from the river.

Both of these gorges delight visitors. As I reviewed the photos shown here, it’s easy to believe they both look a lot a like. And they do, in terms of stone walls and aqua rivers running through them. But they are quite different in a number of ways. 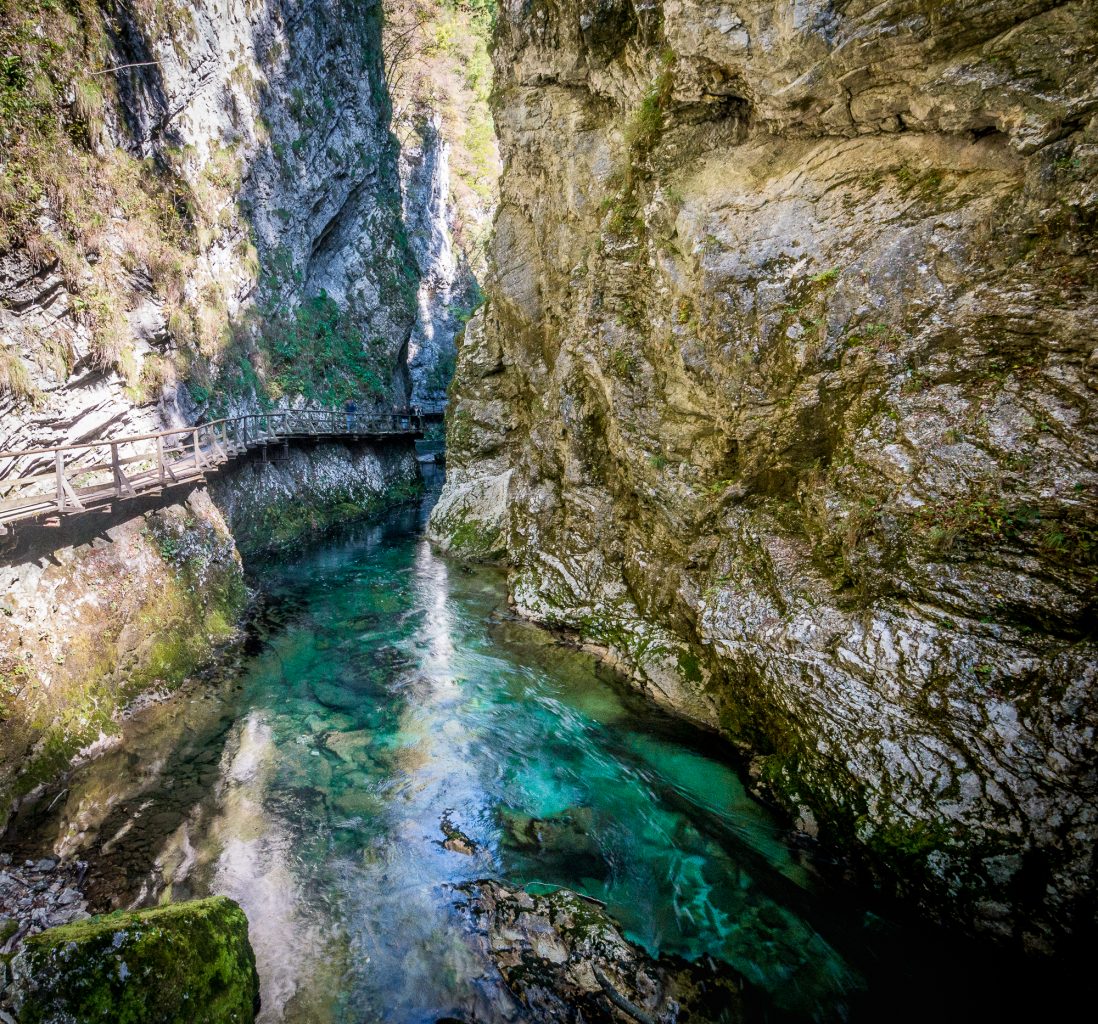 Another shot of how the walkways at Vintgar Gorge parallel the river most of the way.

More people visit Vintgar (let’s make that A LOT more: visiting in the summer can be claustrophobic) because of its proximity to Lake Bled and also because it is longer with 1.7 kilometers (a little over a mile) of trails or boardwalks that line or criss-cross over the Radova River that runs through the gorge. Tolmin is quieter but shorter and has one spectacular narrow-walled area that stands out.

Which should you visit? I like the advice found here about Vintgar  and here about Tolmin. These two articles by Earth Trekkers provide everything you need to know about logistics and what to expect, as well as their opinion on which is better.

I agree with their assessment: If you’re going for easier access and the quantity of beauty, go to Vintgar. Seems like an easy choice, right? 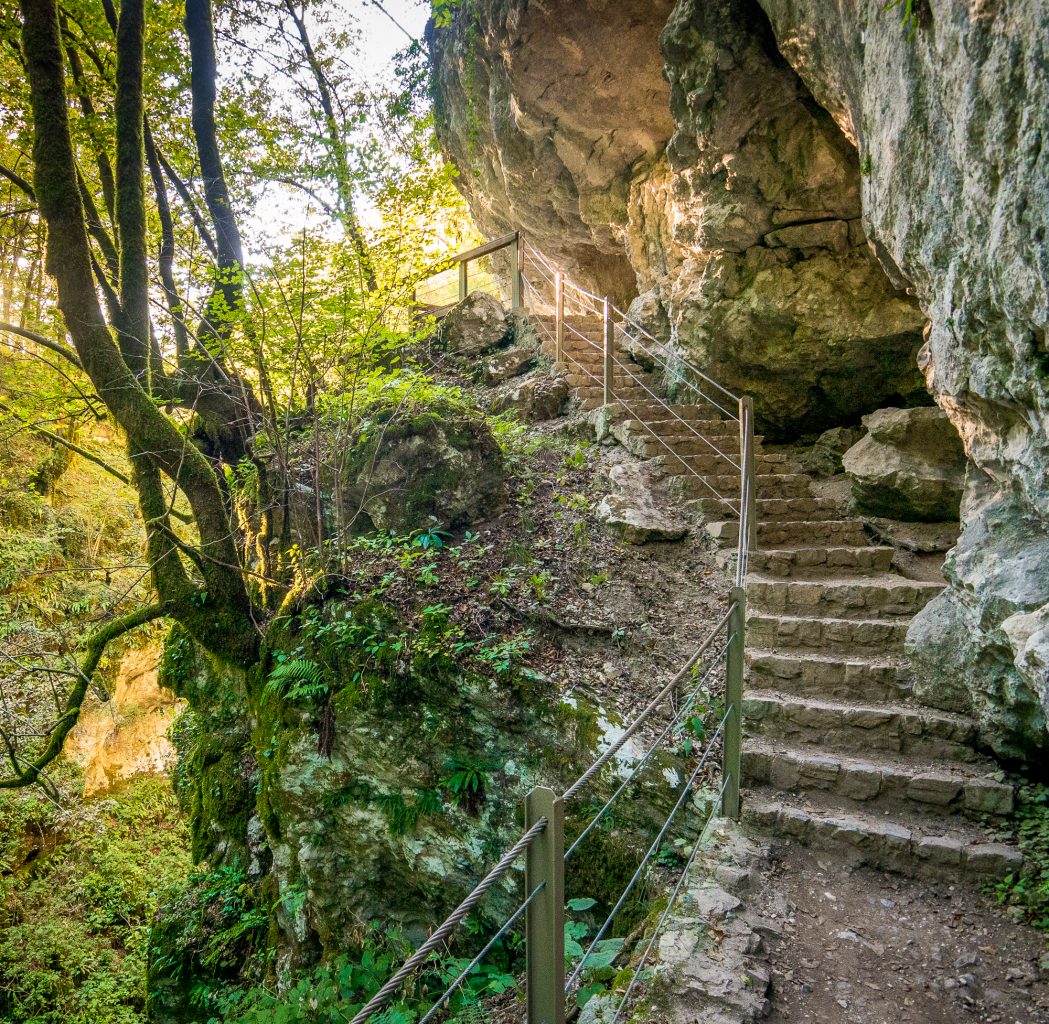 Here’s an example of how in Tolmin Gorge, the trail takes you up above the river in spots.

When evaluating Tolmin Gorge versus Vintgar Gorge (or any place, really) we often forget that what makes any place special is the overall experience there, not just its physical appearance alone. And even physical beauty is, as the old saying goes, in the eyes of the beholder. So let’s explore some of the other considerations that affect one’s experience anywhere using my own visit to Tolmin Gorge versus Vintgar Gorge as examples.

We were there in October, the shoulder season and in some ways, the best season: sunny days but also relatively fewer crowds than in summer. Still, at Vintgar, we were far from alone.

That affected our experience there significantly. I’d get stuck behind large groups of people intent on walking at a turtle’s pace three abreast on the narrow boardwalks. And often, when I stopped to make a photo or just marvel at the ever-changing color of the river, I’d have people brush against me even when there was plenty of space around me. 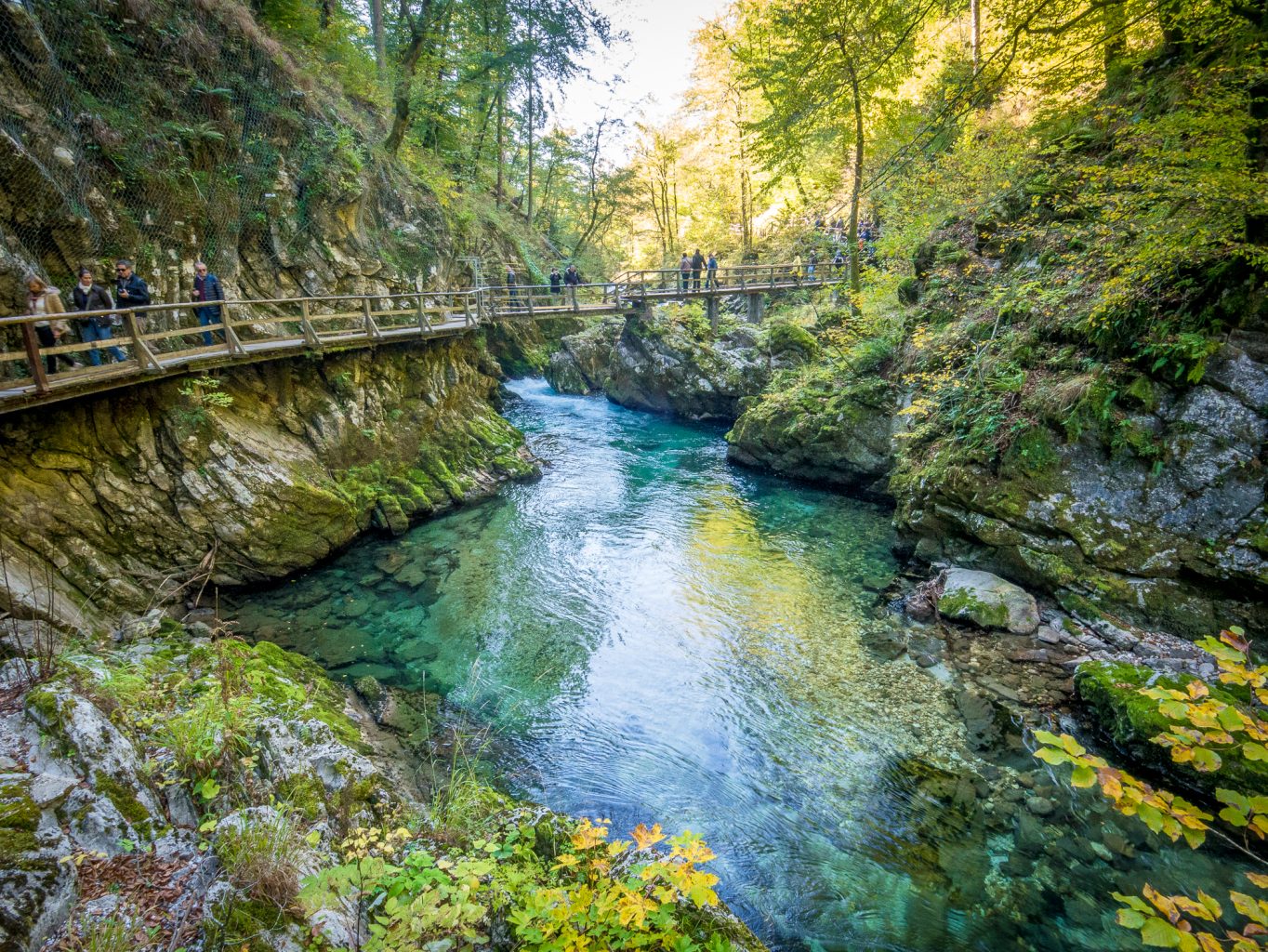 Here near the entrance to Vintgar Gorge, you can see there are many more people than at Tolmin Gorge despite, as in all these photos, me waiting until there was a lull in the crowds.

In retail, research shows that narrow aisles, say in a department store, decrease sales because of the “butt bump” factor: Your shopping pleasure decreases dramatically when you’re jostled by others. Same with your enjoyment of these gorges. 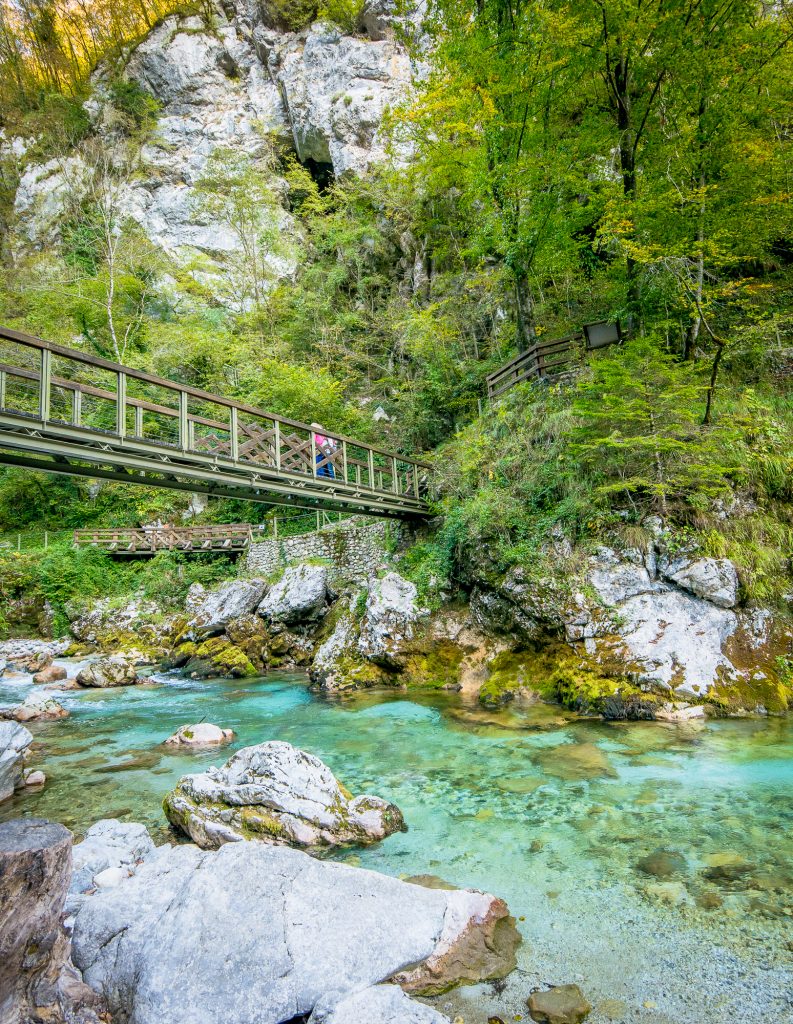 Here at one of the bridges near the entrance to Tolmin Gorge, you can see there were only a few other people when we visited.

With Tolmin, we encountered perhaps five or six other couples or families the entire time we were there. That made it a much more peaceful and even meditative experience.

In addition, at Vintgar, we were treated like a commodity at the ticket booth. At Tolmin, I was able to joke with the woman selling tickets, both on our initial entry and then later when I ran back to get a jacket from the car for my wife (the gorges can cool off in the mornings and evenings). On my re-entry, I explained my task telling the ticket seller that retrieving the jacket was worth the effort because in my country, we have a saying, “Happy wife, happy life.” I knew the woman’s English was excellent, but she didn’t react. I then added another, “When Mom’s not happy, nobody’s happy. But when Dad’s not happy, nobody cares.” That got a response. I could hear her still laughing long after I left the ticket booth on my way back to the gorge.

The point is, people can make your experience or they can detract from it, no matter how beautiful the place is. Thus, from this perspective, Tolmin won hands down over Vintgar. 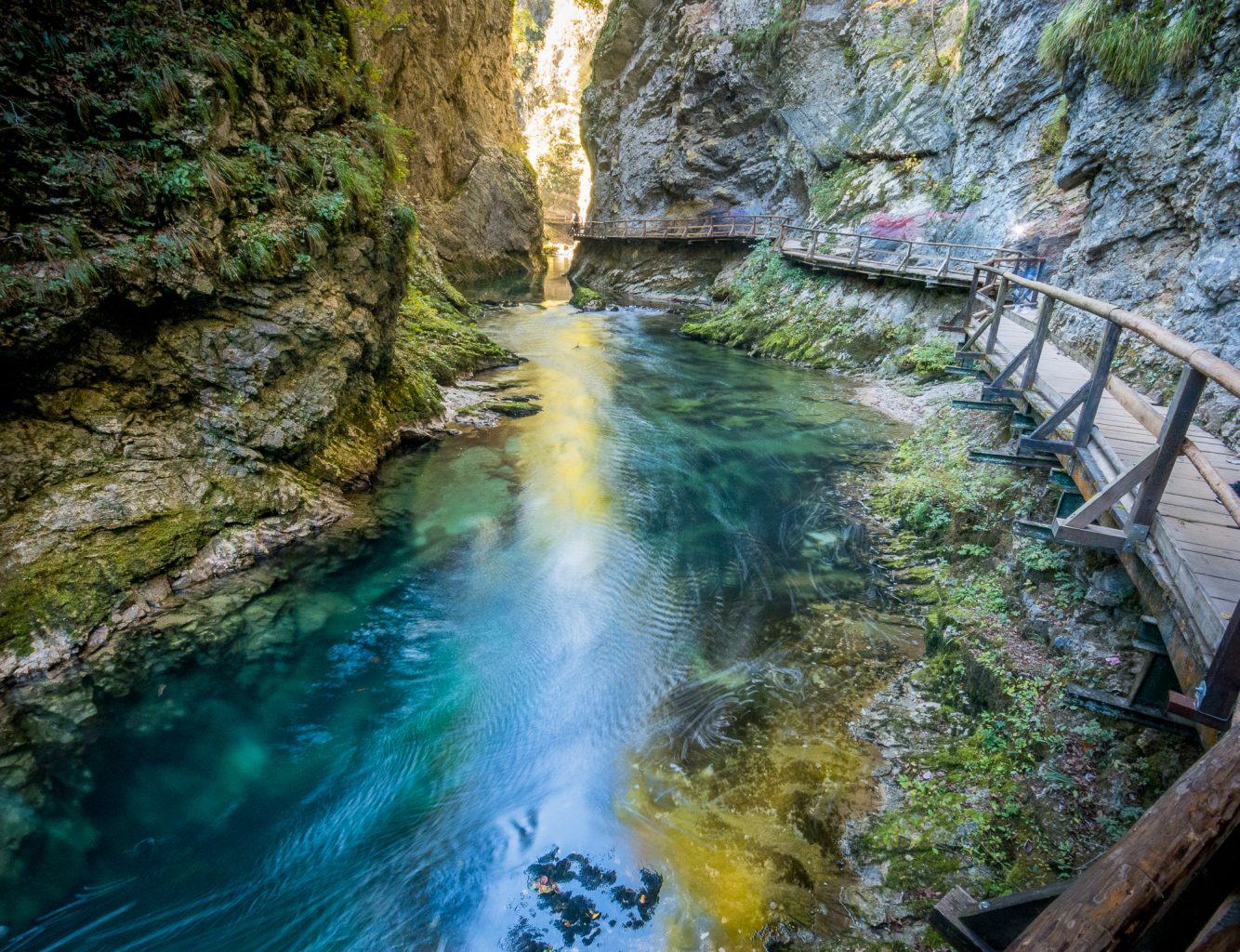 Here at Vintgar, you can see what happens when the bright midday light creates glare on the water.

With Vintgar, we arrived just before noon. Few popular places are at their finest at midday, not just for crowds, but also for lighting. Sunlight significantly affects the water color of the river in both gorges. You’d think having the sun almost directly overhead would help. And it does for illuminating the shadow areas of the canyon and brightening the water. But it also creates glare and, psychologically, it changes the overall feel. 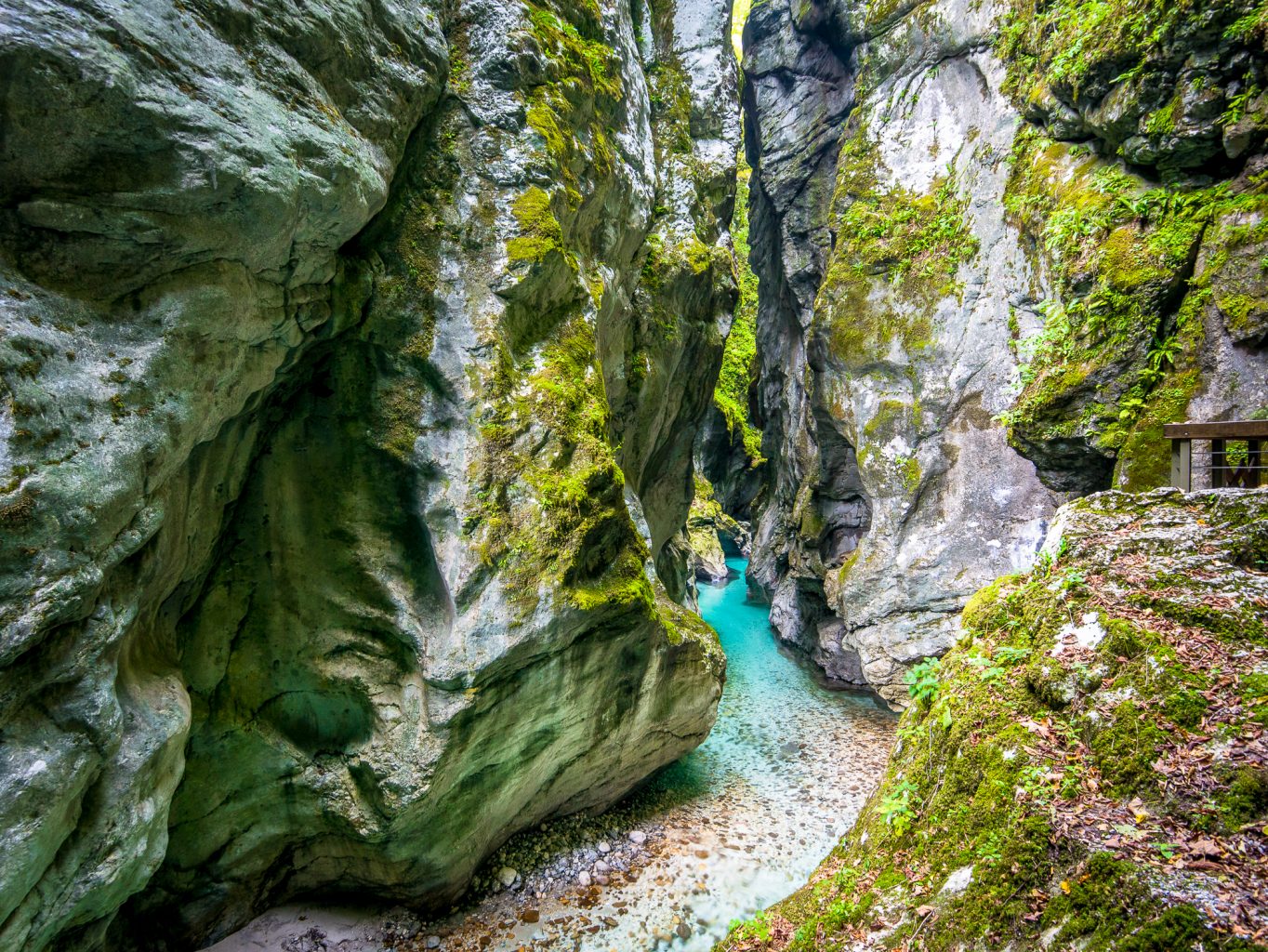 At Tolmin, coming in the late afternoon meant fewer people and also a more soothing light. The lower light led to slightly less saturated colors in photos of the river. But as the sun edged toward the horizon, the lengthening shadows enhanced Tolmin Gorge’s mystery and allure, improving both the mood of the place and our mood in it as well. So again, because of our timing, Tolmin took the prize over Vintgar.

The month you visit will affect the crowds and light as noted. But it can also affect the water flow. But in this case, it affected both rivers equally, so for us, this was a tie. 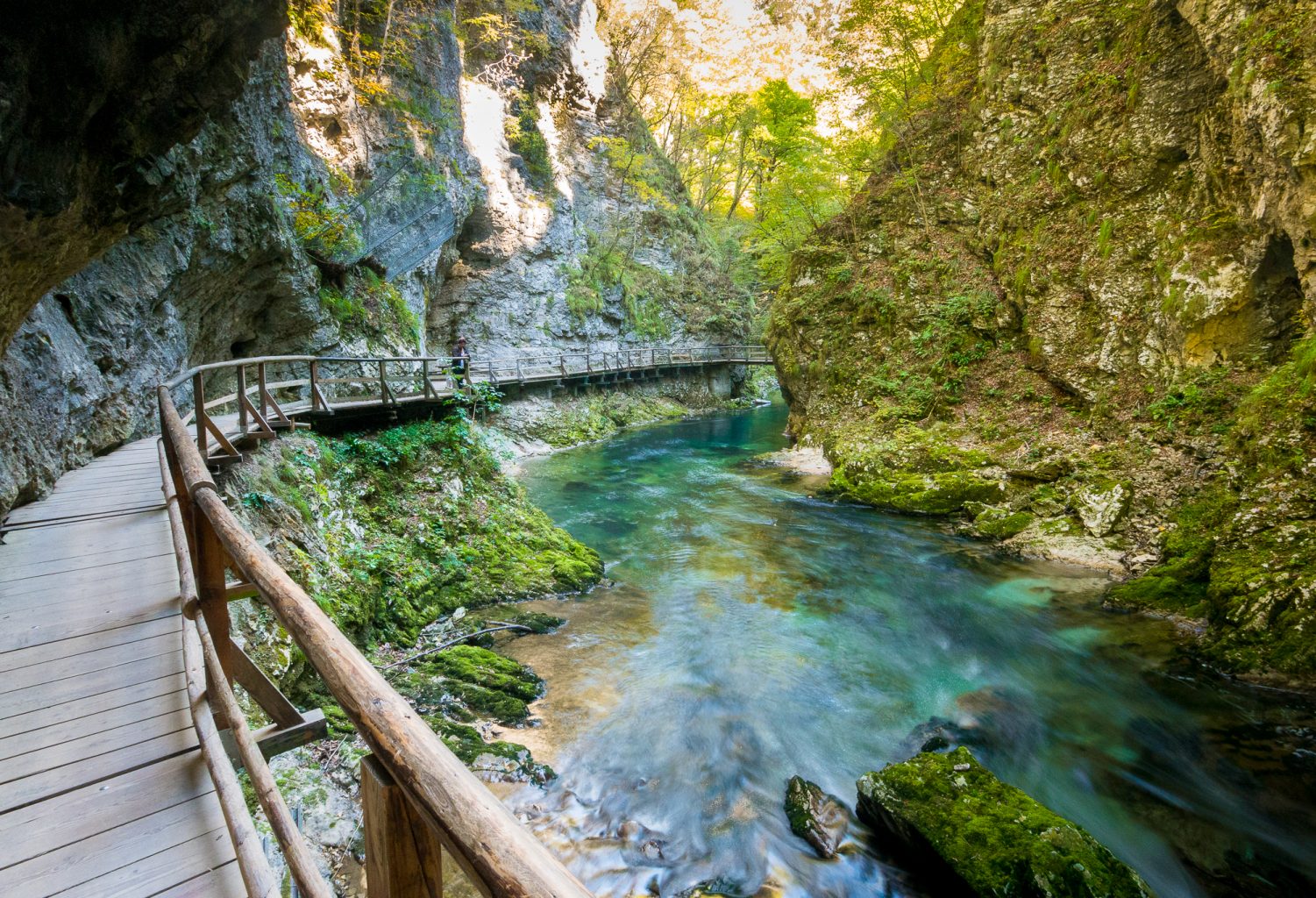 Having a quiet moment with few other tourists around improved how I experienced Vintgar Gorge in surprising ways.

Your own attitude and situation 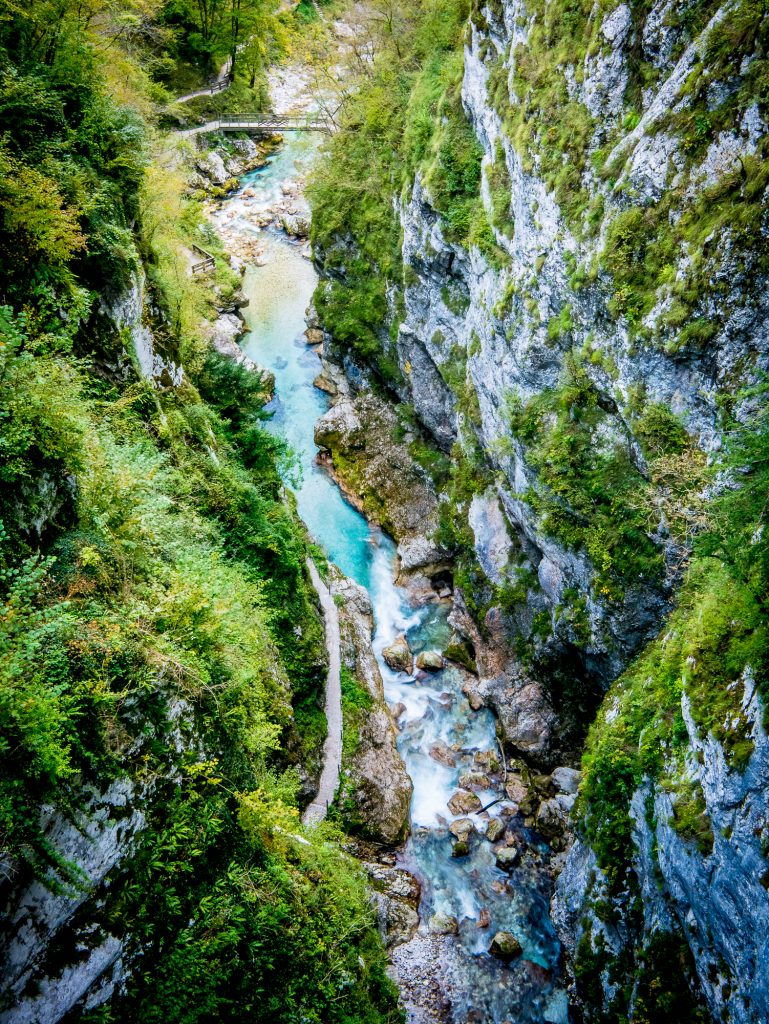 This view from bridge above Tolmin Gorge shows the quiet lack of others present there.

Probably the greatest factor influencing your experience will be you or, specifically, your attitude in the place. I have a friend who, on a trip to London, took his wife and two young children to a famous restaurant. But because their kids were acting up and everyone was hungry and tired, the magnificent meal before them went unheeded or at least undervalued. They couldn’t appreciate the experience around them due to the experience between them.

For us, our visit to Vintgar was in the middle of a long day of driving. Thus, while we wanted to engage all the marvels of Vintgar Gorge in a leisurely manner, we knew we had many hours of driving and much to see ahead of us. With Tolmin, we arrived there after a wonderful day of hiking. We were thus relaxed and had nothing else planned for the evening.

Our mental states differed dramatically in Tolmin Gorge versus Vintgar Gorge and as a result, we absorbed more of the tranquil beauty at Tolmin even though there was less to see there. So, once again, for us, Tolmin won. 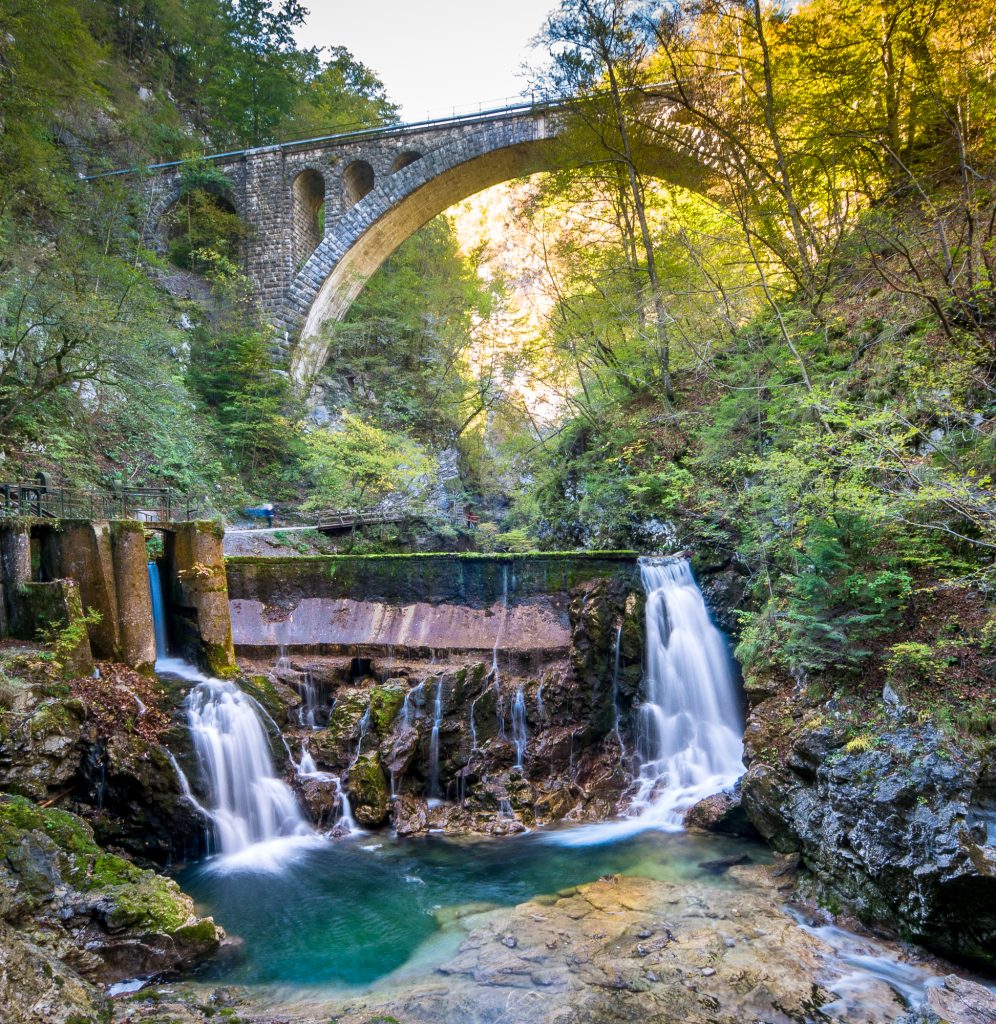 Vintgar Gorge wins in terms of its final sight, this waterfall with the old bridge behind it.

A myriad of other factors will influence your situation as well. But these examples hopefully reveal that the physical attributes of a place affect only part of your enjoyment and appreciation of the overall experience. When you take all the factors into consideration, we liked Tolmin more. But if we’d come at a different time of day to Vintgar, it likely would have taken the prize. 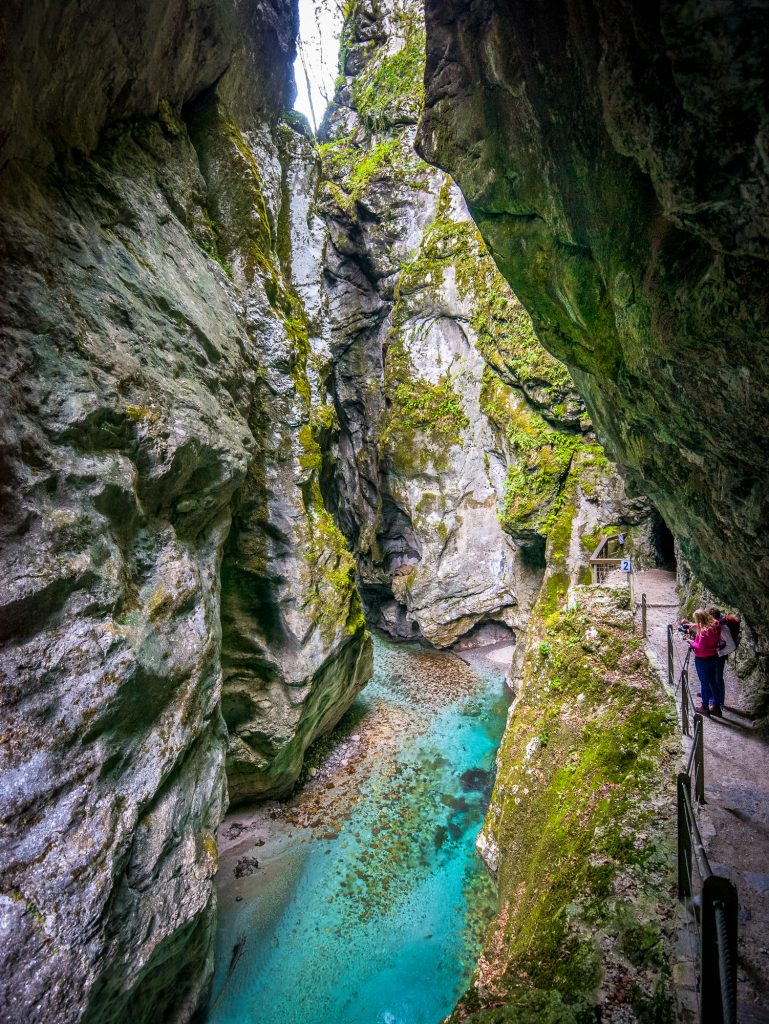 Tolmin Gorge wins in terms of its one spectacular area off one branch of the gorge.

The point is this: Be aware of all the factors that will affect your experience in a place. Recognize that more is at work than what you see (even though choosing a place to visit based on its visual appeal is still an important consideration, just not the only one). Understand the dynamics at play. Control what you can: time of day or even the season you visit for crowds, for light and even for weather. Eat and drink so you’re not hungry (and grumpy) or dehydrated, etc.

Do what you can to increase the likelihood of you being in the right place when you’re in that place. And when you do, to paraphrase the line from The Hunger Games, the odds will be ever be in your favor. It won’t matter whether you’re at Vintgar or Tolmin Gorge. You’ll have a remarkable experience either way.