Skip to content
Home Explorations Travel Piran, Slovenia and the joy of wandering

Piran, Slovenia and the joy of wandering 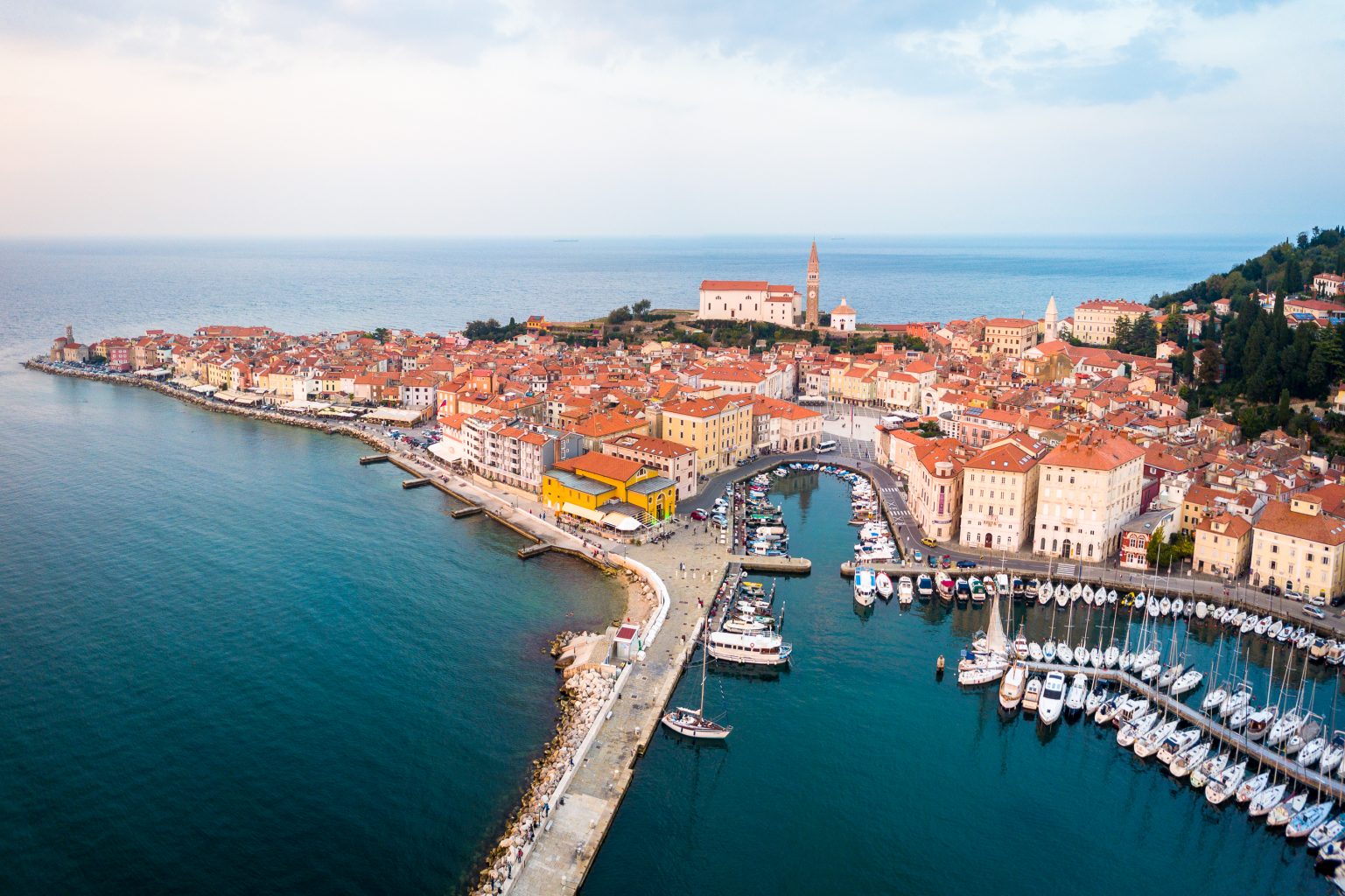 Piran: Venetian feel on the coast of Slovenia 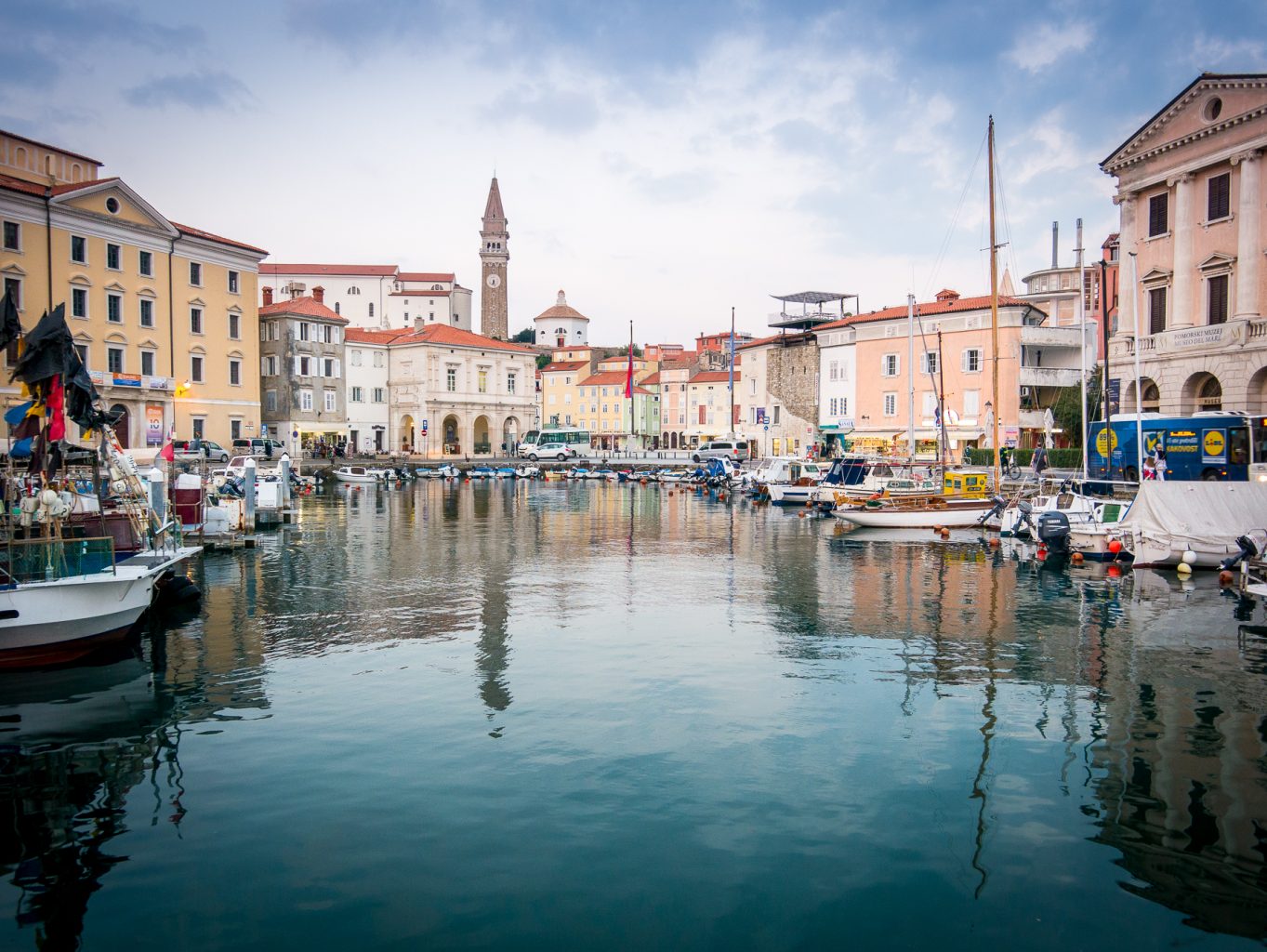 Piran, Slovenia lies on the Adriatic, across that sea from its big Italian brother, Venice. Dating back to the 10th century, Piran came under Venetian rule in the 13th century and the influence is unmistakable to this day.

Piran lacks any must-see individual sights. You don’t go for some outstanding museum or a particular historical edifice. You go to wander. You visit Piran to absorb the well-lived-in beauty and even mystery that comes from exploring the alleyways and streets of this Slovenian town with a Mediterranean feel. In the following map, I’ve highlighted (using red markers) places called out below primarily so you have some sense of context and location. But think of these only as suggestions. Piran works best when you make your own discoveries.

A town made for exploring 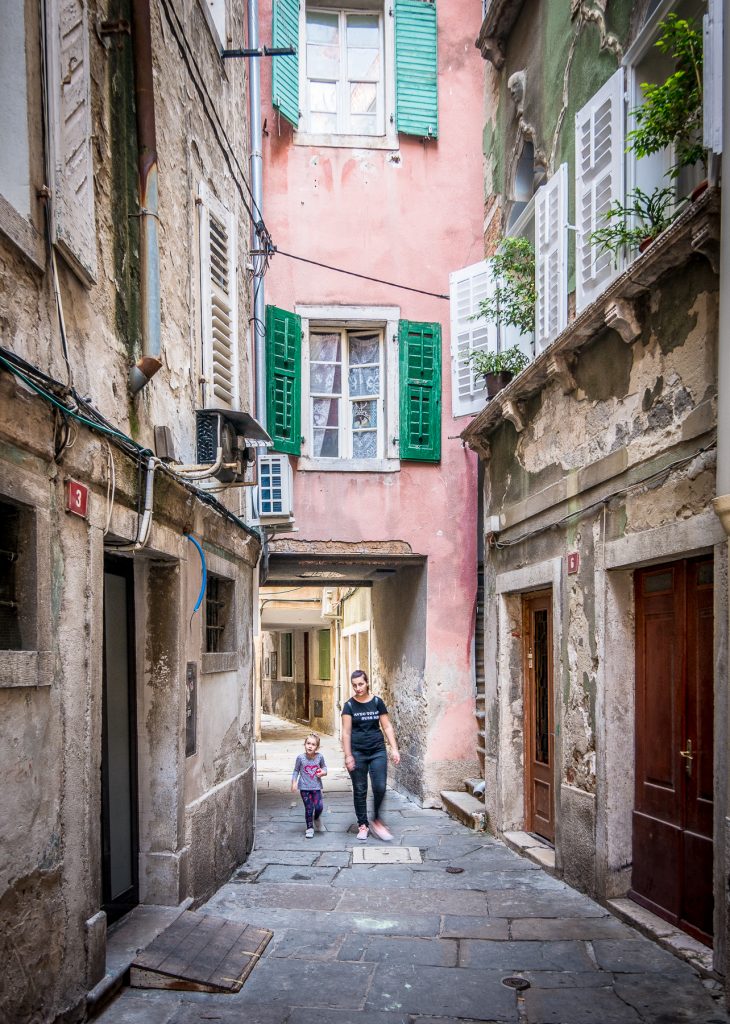 You wander Piran not as a flaneur, a saunterer of wide boulevards, but as an explorer, a discoverer of intimate wonders. In a place like Piran or any maze-like environment (Lijiang, China, Fez, Morocco or Rothenburg, Germany all come to mind), you’re not wandering as if on a stroll to casually absorb what comes your way. Instead, exploration here is more intentional, a quest to uncover what lies around that next corner. As you go, you’re filled with constant surprise and delight because you have no idea what’s coming, either in the form of people, architecture, light or places (like small shops, beautiful churches, museums, galleries, workshops or just laundry fluttering above you as colorful signs of daily life).

A place of light and shadow 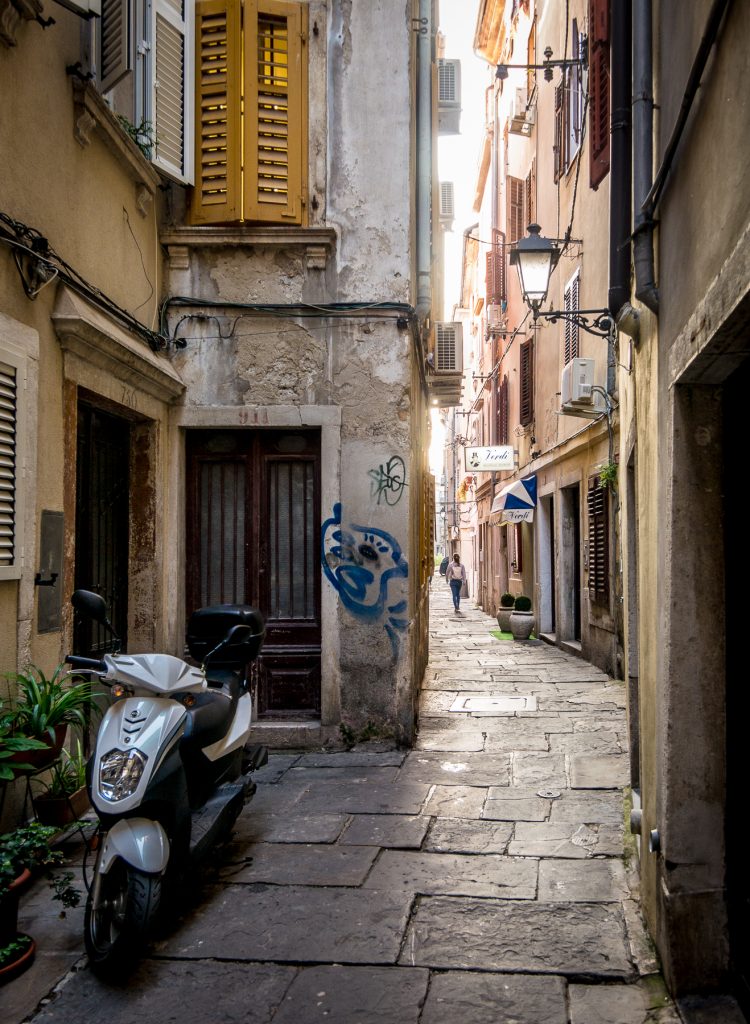 How fitting that both Piran and the word “chiaroscuro” originate in Italy. Chiaroscuro is the dramatic contrast between light and dark often associated with paintings where a single source of illumination creates intriguing shadows and highlights on the subject. In Piran, particularly in the late afternoon, the sun filters into the narrow alleyways (one was no wider than a meter, about 40 inches) illuminating the upper stories of closely-packed stone buildings while the cobblestone streets below lay in shadowy silence.

You’ll likely start in the main square, Tartinijev trg (Tartini Square), and head out through the rear of the square. You then pass through a short tunnel of darkness and emerge into the brilliant afternoon reflections off the Adriatic as you ascend to the town’s ancient city walls for a view over the entire peninsula, a jut of land that both constricts and defines Piran. Pay your two euros to climb to the top of the crumbling stone walls and take in the scene: red tiled roofs surrounded on three sides by the gray-blue sea. 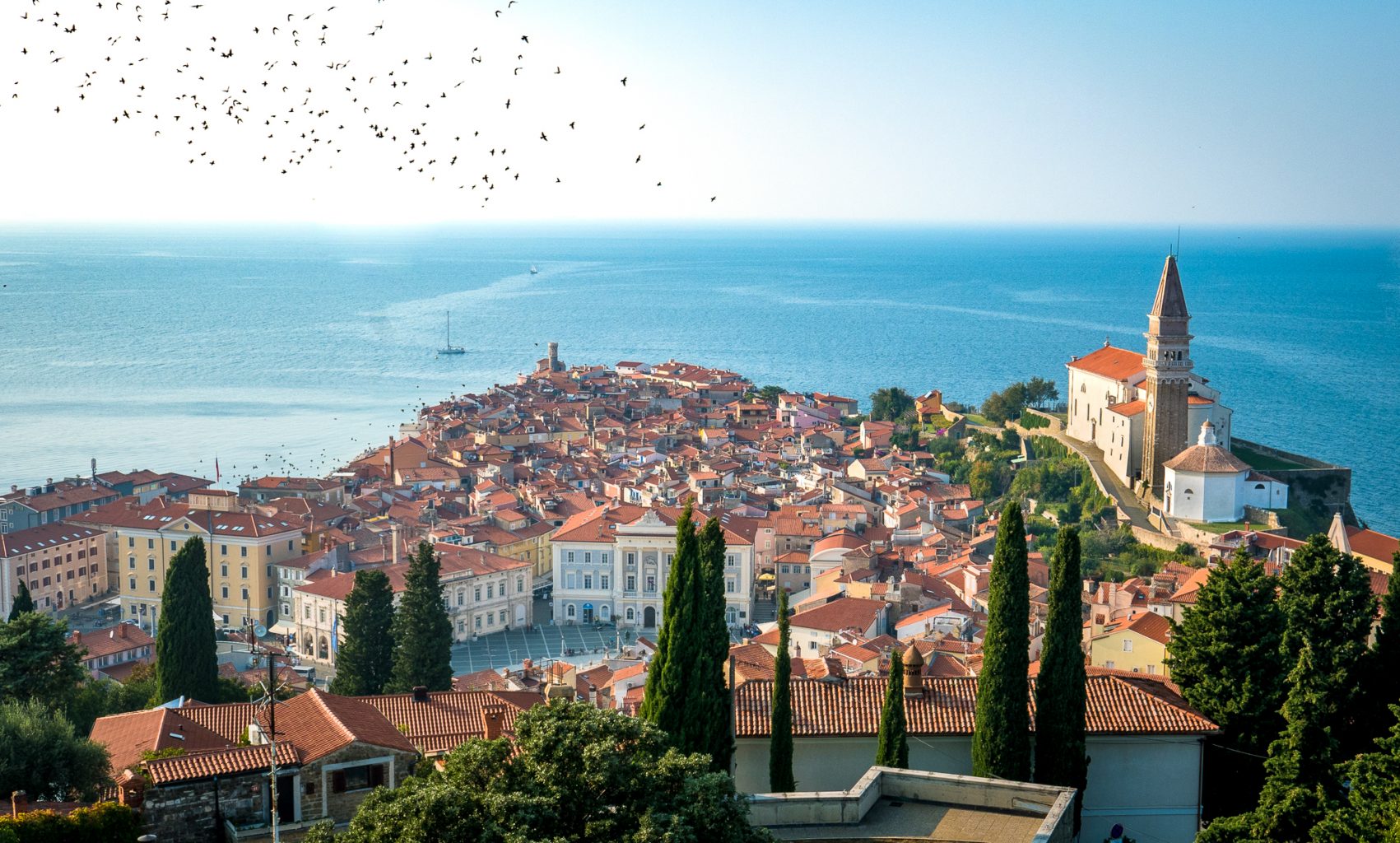 View of Piran from the old town wall. You might even see a huge flock of birds flying by.

Then plunge back into maze, coming up later, for another overview from the top of St. George’s campanile (bell tower). Just a word of warning: try not to be up there on each quarter hour unless you enjoy the ringing of large church bells just a few feet (less than a meter) away from your ears.

A different view of Piran, this one from the St. George belltower

Descend the belfry and pop into the church of St. George. It’s a large church for such a small town. Rumor has it that the residents built it that way so that marauders sailing by would see the grand church and tower, assume the town was much bigger (and thus better defended) than it was, and sail on.

From the church, back you go into the warren of small streets making your way to the end of the peninsula to check out the lighthouse. Stay in the sun as you pass the many restaurants offering views over the bay and fresh seafood. Then turn left at your choosing back into the alleyways and continue the exploration. 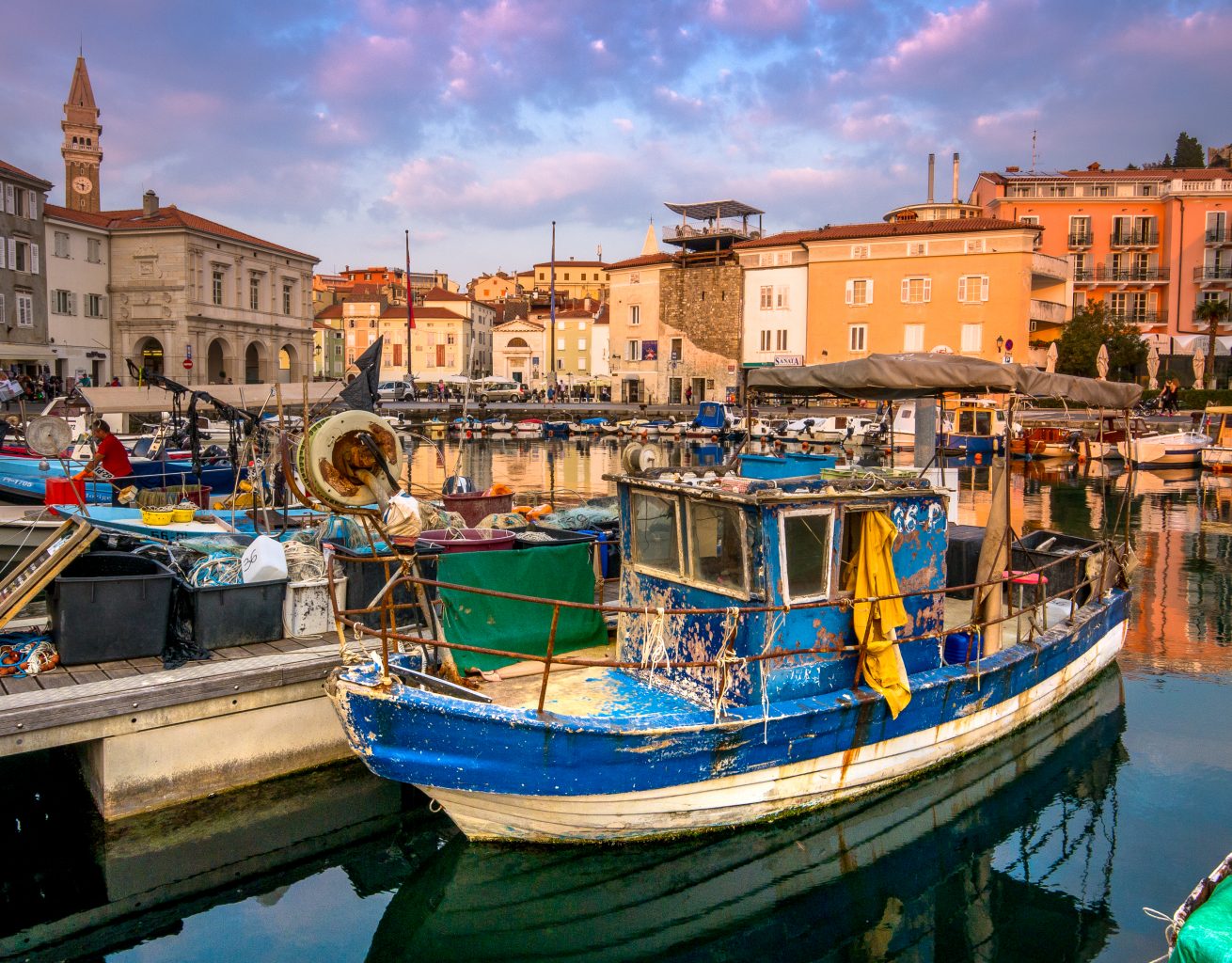 There’s no right or wrong way to do Piran. If you feel you’re lost, keep going. You’ll either end up at the sea (or harbor) or in Tartini Square, the oval-shaped hub of the city from which these numerous alleyways spoke off. Near the center, you can see the bronze statue of the square’s namesake, renowned violinist Giuseppe Tartini (1692-1770). 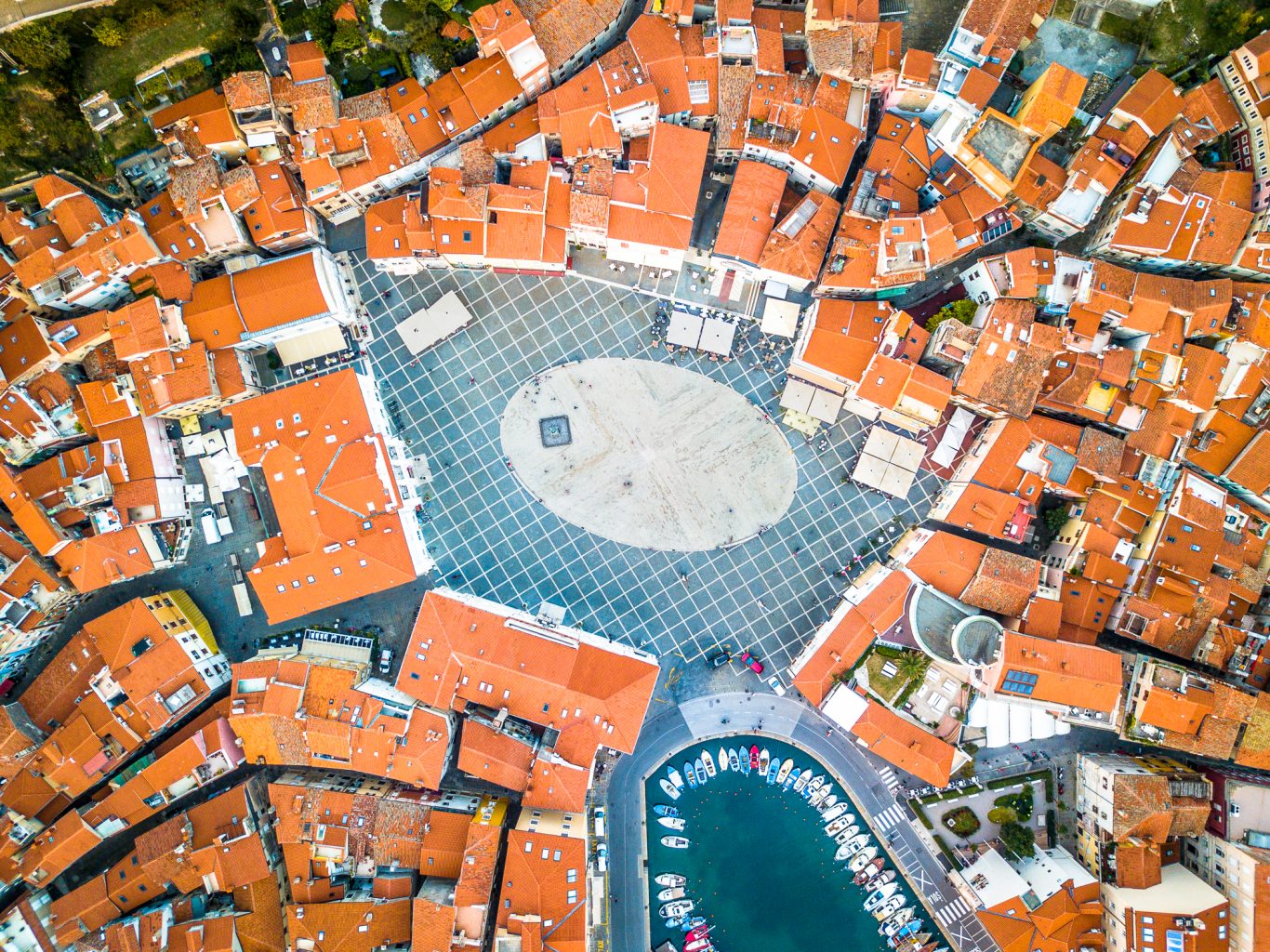 Tartini Square: The heart of Piran

Take a break on the square for a drink or some gelato. Mestna Kavarna, the cafe between the town hall (where you’ll find the tourist information office with helpful maps of the town) and The Venetian House (with its fancy corner balcony) serves a gluten-free double-chocolate gelato that will make a chocolate lover weep. 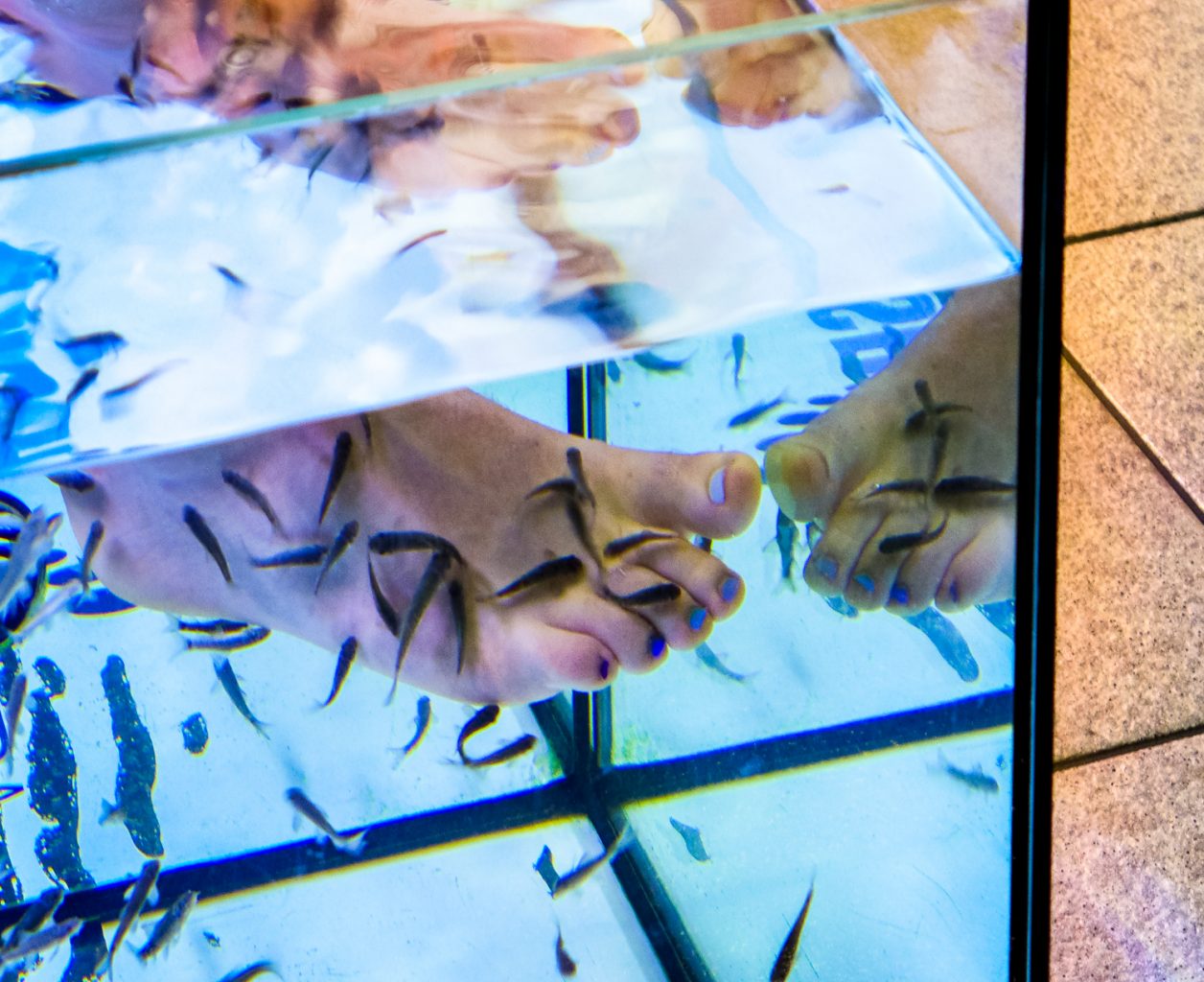 After your refreshments, pop into the many stores around the square or do what my wife and son did: Head up the south-bound alley between the square and the harbor and look for signs for the “Fish Spa.” There, you can have the callouses of your feet smoothed away by submerging them into tanks filled with small, toothless fish who somehow gently nibble or suck away the dry skin leaving your feet feeling baby soft afterward. Seriously, it seems like a gimmicky tourist experience, but my wife and son loved it. Apparently, if you go in summer, expect long lines to get in.

UPDATE: Since I posted this, I heard back from a thoughtful reader, Michael, who pointed out some serious health concerns about these fish spas. My family wondered at the time but the woman there at the fish spa convinced us they clean the tanks out every night. Well, even if they do, you might want to read these two articles that Michael sent before you consider doing what my wife and son did: 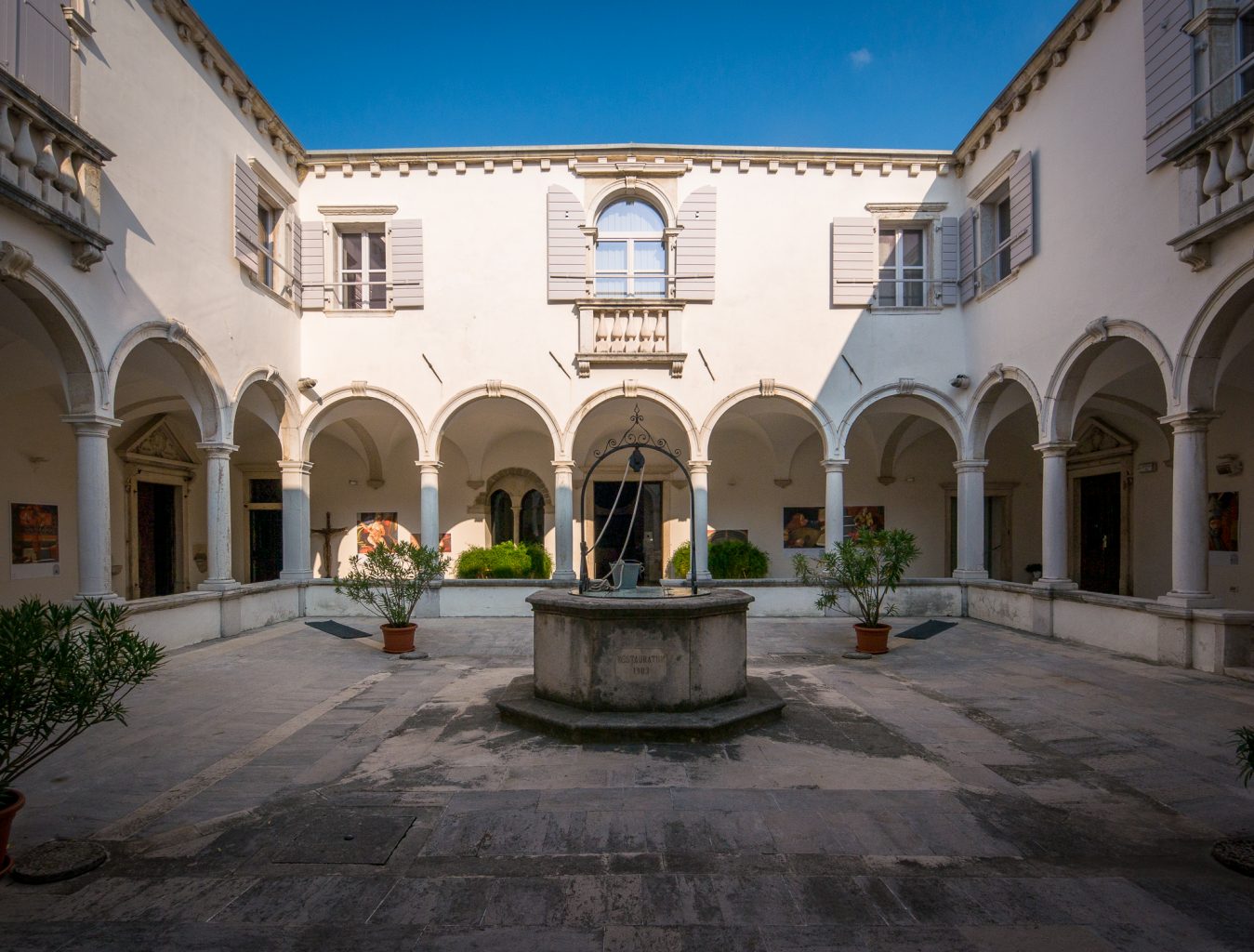 You can then walk your soft feet back up the hill behind the Tartini Square and have a quiet respite at St. Francis’ church and cloisters where they loop a recording of sacred music. It’s surprisingly soothing. 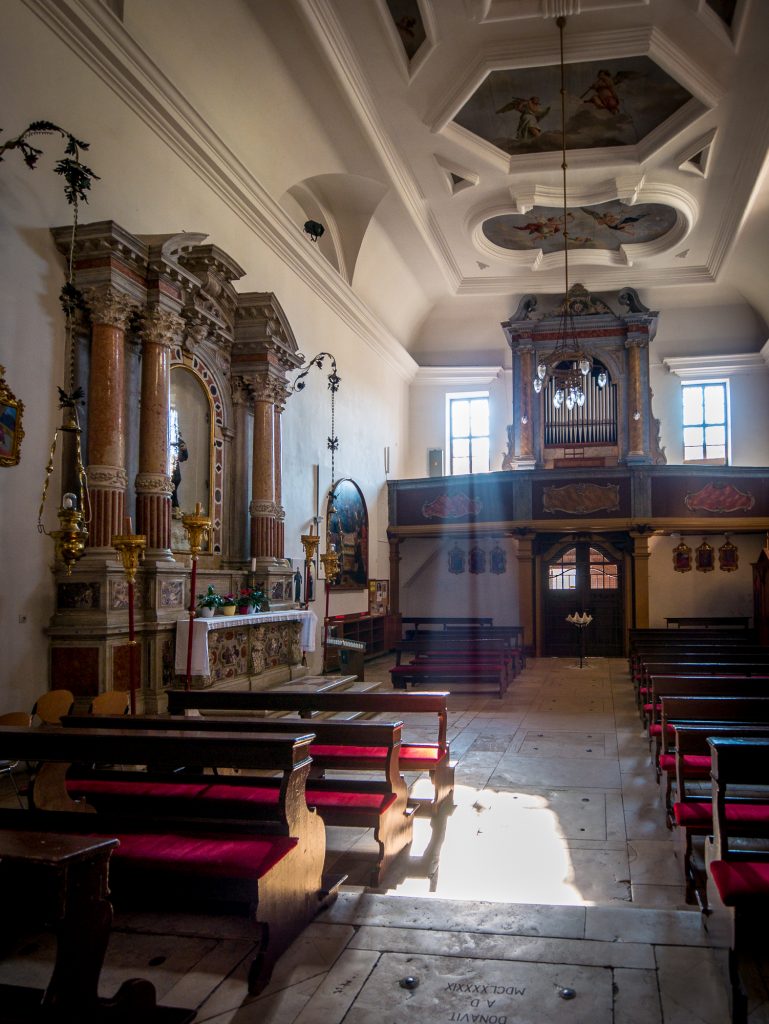 Which is good because now it’s time to head back into the alleys (unless you first want to pop across the street to one more church, the Church of Mary of the Consolation). Again, you can do as much or as little exploring of these tiny streets as you want. But be aware that even the alleys you visited earlier will appear different as the light fades and evening brings on an entirely different experience. Just be sure to emerge when it gets close to sunset since you’ll want to roam around the beautiful harbor or catch a view the last of the sun’s rays as it dips below the Adriatic horizon. 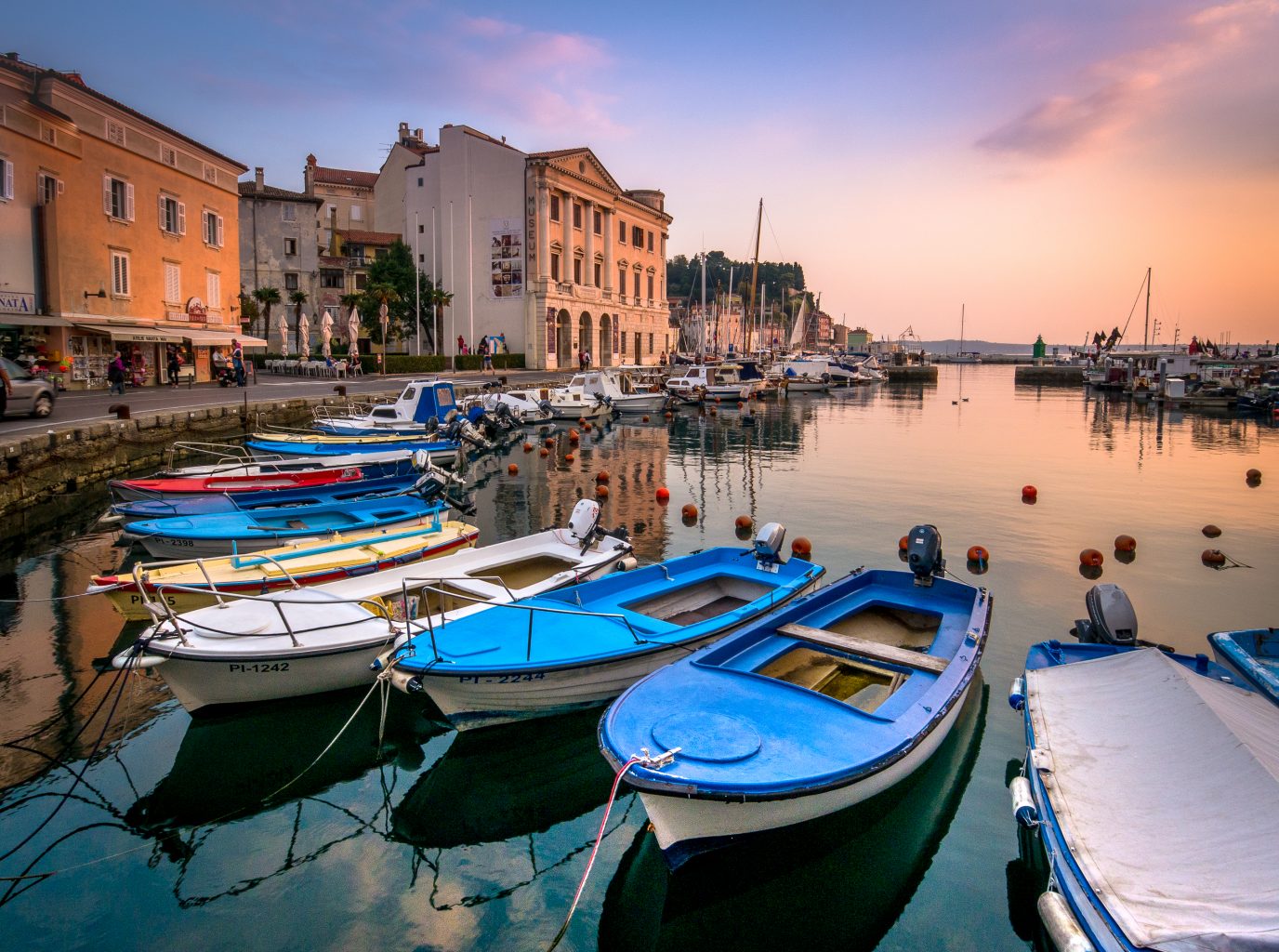 Getting lost to the rhythms of Piran 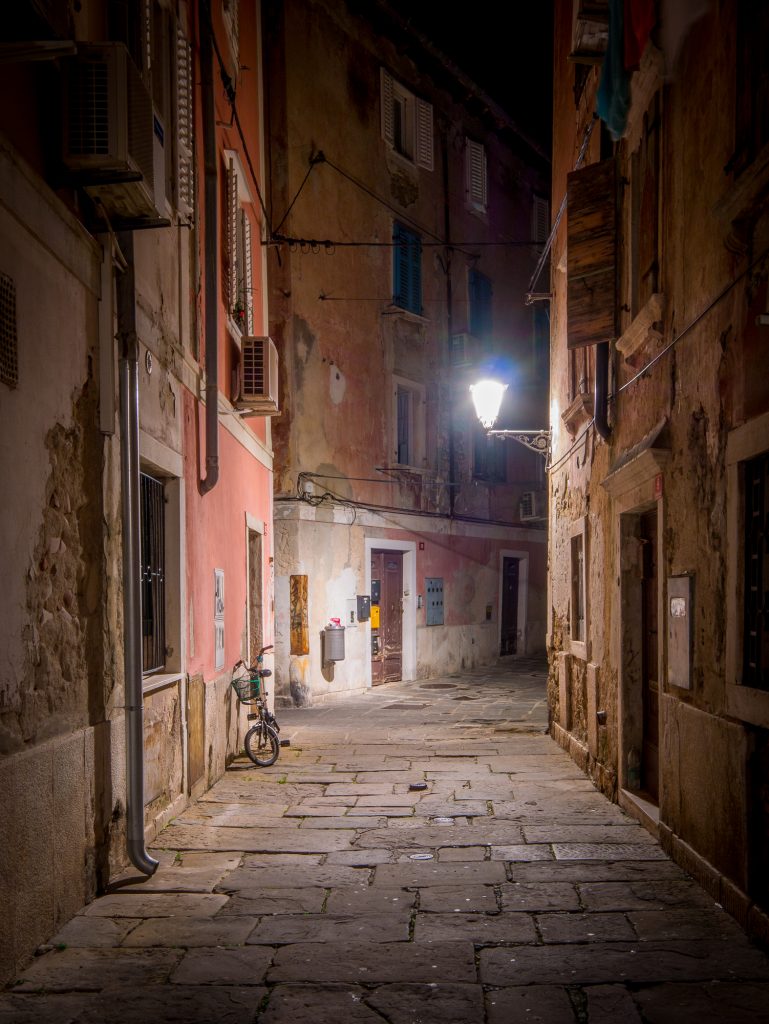 When you wander Piran in this way, your explorations can be a wonderful combination of adventure and rhythmic meditative experience, particularly if you’re doing this alone. You go at your own pace, turn where and when you want and create your own adventure. I could see doing this with a friend or partner as well because then you could share in the discoveries. But either way, it’s an immersive experience that is highly personal and highly rewarding. And when you finally get tired, you can try one of the many outdoor restaurants or cafes. And of course, that double-chocolate gelato. 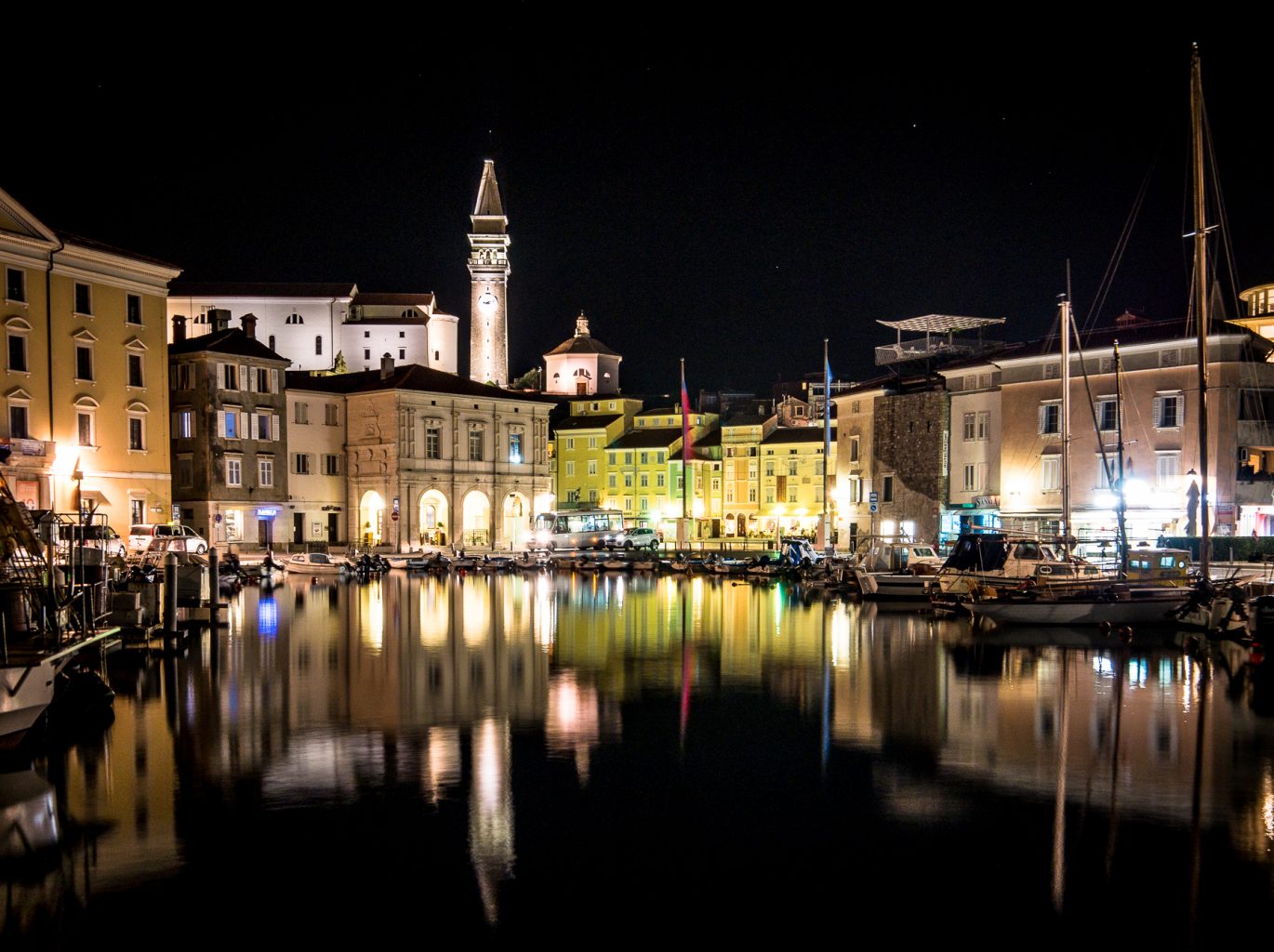 If you have the time, do what we didn’t but wanted to do: visit the old Medieval center of nearby Koper (lying 20 km from Trieste, Italy. It’s Slovenia’s main port city and pretty industrial on the outskirts but lovely in its core) or dine in the even closer fishing village of Izola.