Home Explorations Look up: The Church of the Savior on Spilled Blood, St. Petersburg, Russia

Look up: The Church of the Savior on Spilled Blood, St. Petersburg, Russia 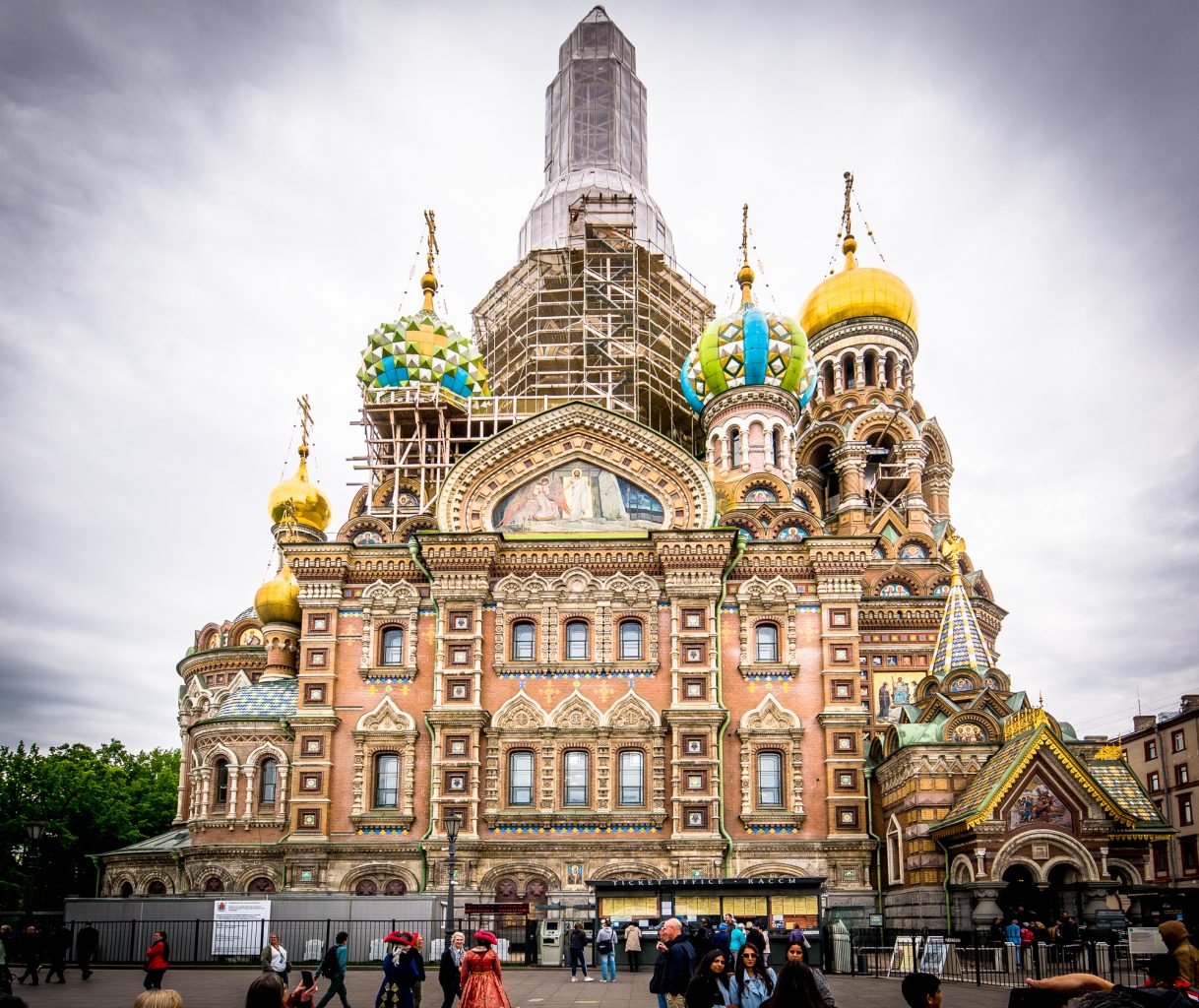 It is also one of the few places where people do something they rarely do elsewhere: They look up. 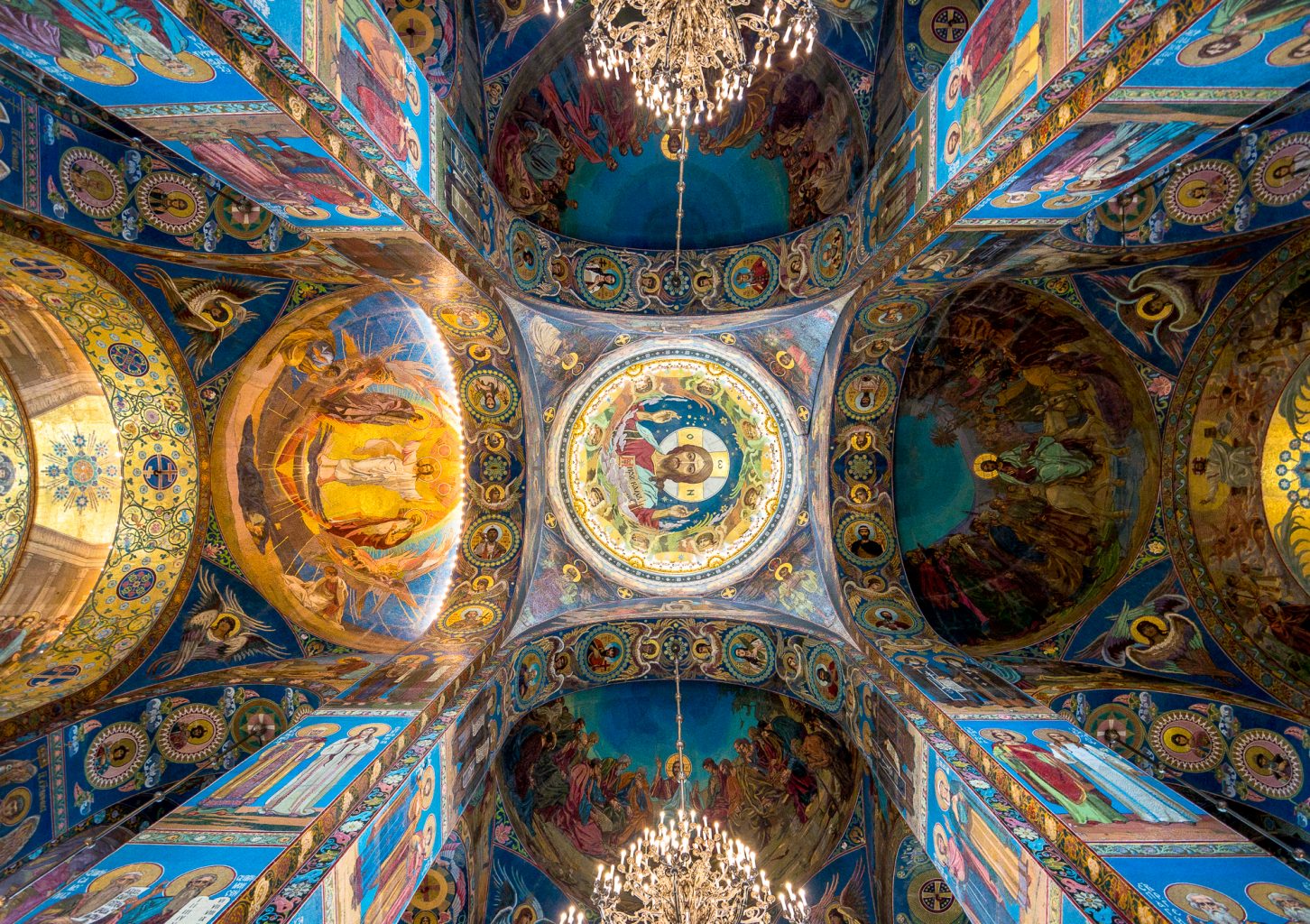 Background on the church

They do so because the Church of the Savior on Spilled Blood is filled floor to ceiling (and ceiling to ceiling) with beautiful mosaics. While today it serves primarily as a museum or gallery of this mosaic work, it was originally constructed at the end of the 19th century to honor Czar Alexander II whom anarchists fatally wounded on the spot where the church now stands (so now you know who’s blood was spilled there). 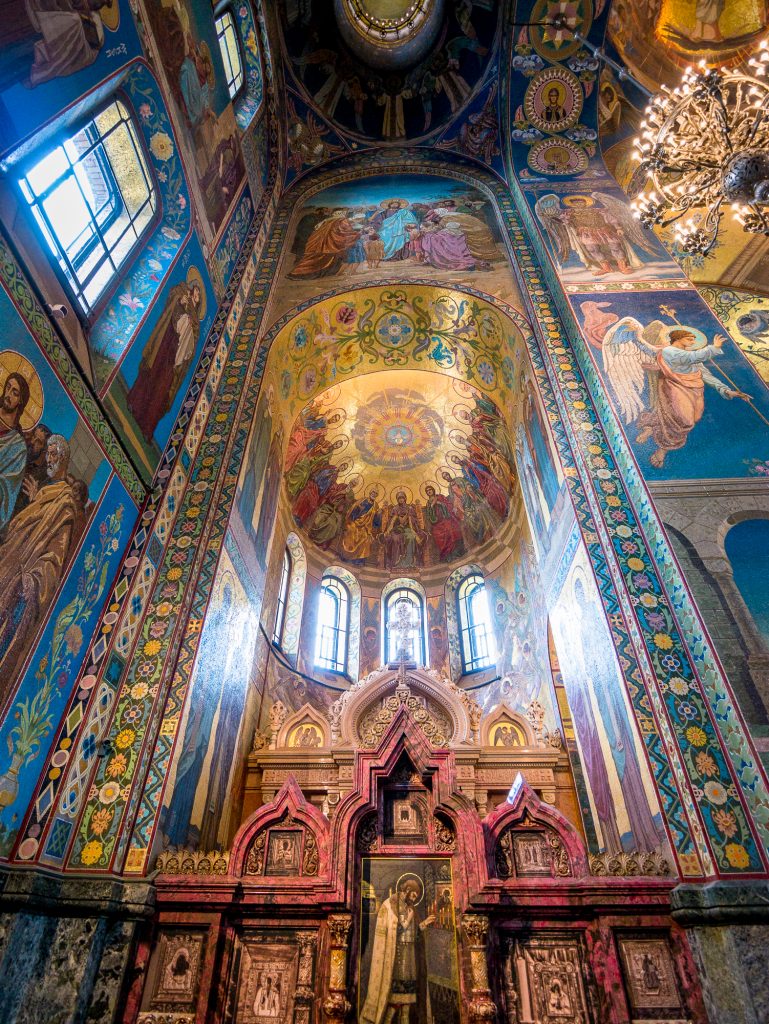 The czar had survived an attempt by one anarchist to kill him with a grenade and as the czar wrestled with the culprit, a second conspirator detonated another bomb killing himself and fatally wounding the czar who died a few hours later. Two years later, Alexander II’s son, Alexander III, initiated construction of the church on the site to honor his fallen father.

It’s nice to know the background of the place, but once you step inside, you tend to forget the history lesson and instead, you just marvel at the mosaics. And you get the best view of these if you practice a key form of Looking the Other Way, looking up.

Why we don’t look up

Most of us rarely look up. We don’t do so for a few reasons. 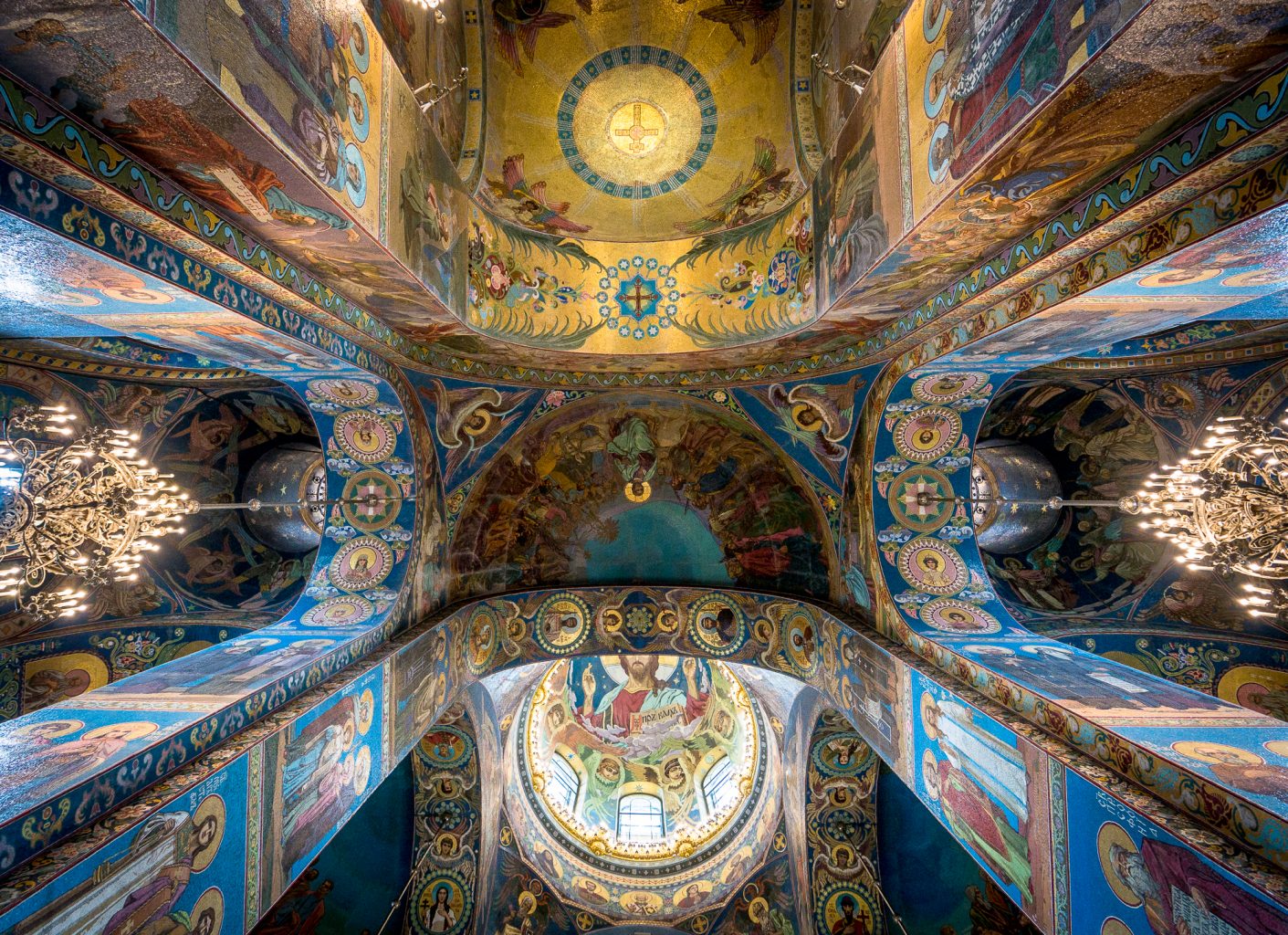 First, you can’t walk and look directly above you at the same time without risk of bodily harm or odd stares from others. Second, so many of us are glued to our phones peering in the opposite direction of looking up that we rarely consider there might be something of value above us. Third, it’s not that easy. You have to crane your neck back to look directly up. That’s a hard posture to hold for long, unless you’re Michelangelo painting the Sistine Chapel (and some surmise even he reclined on a cot-like contraption to do so). 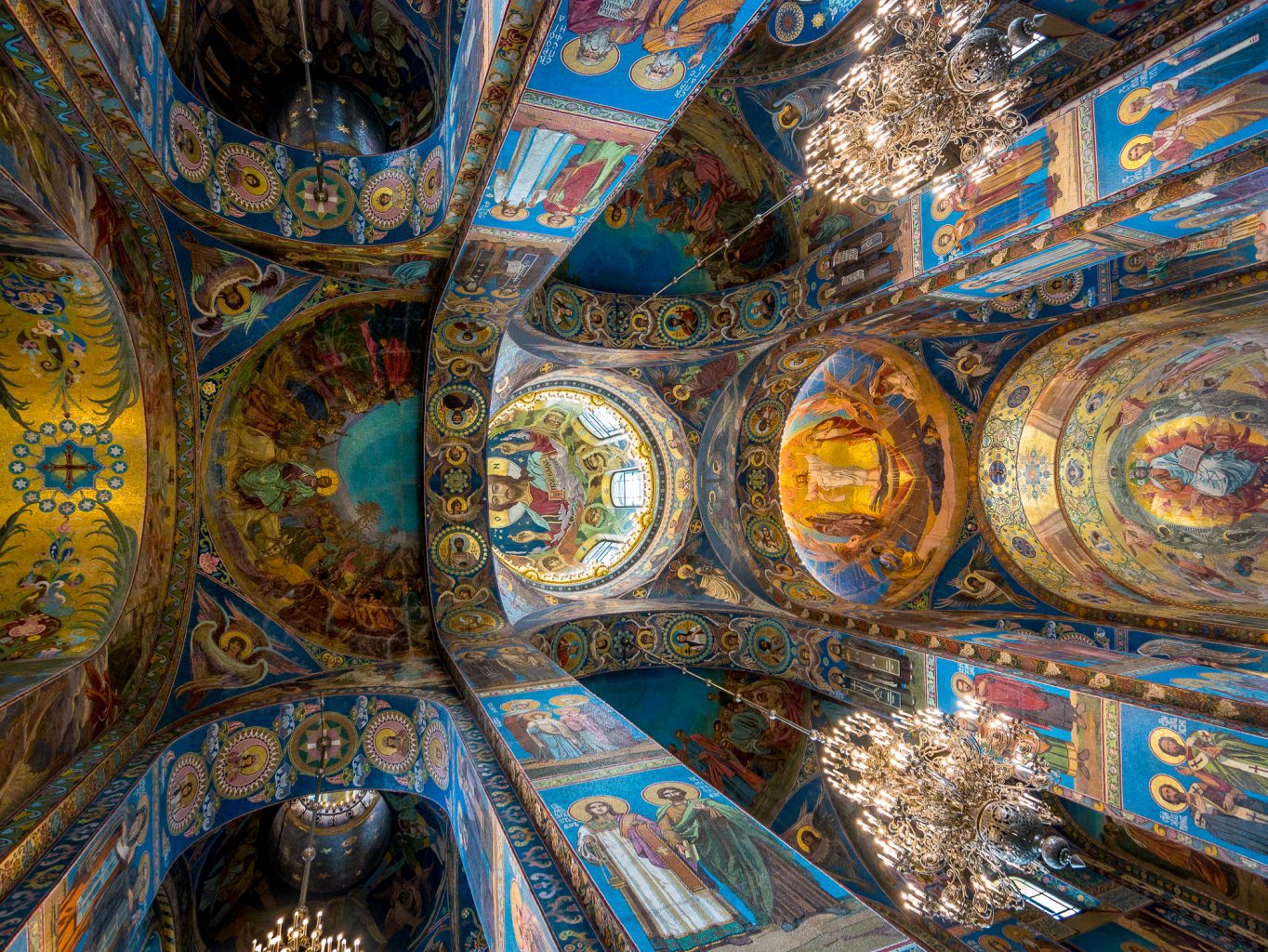 The benefits of looking up

But if you do look up, you behold what few others ever witness. You see more nature (clouds and birds, maybe branches and leaves). You see more architecture (the most interesting parts of older buildings are usually near the top or around the entrance or above you as you go through the entrance). And you may find surprises — from interesting signs to ceiling details to hidden doors. You also gain a much greater appreciation of light or rather, lighting. We almost always focus on the object illuminated rather than the source of illumination. But looking up can help you do both. 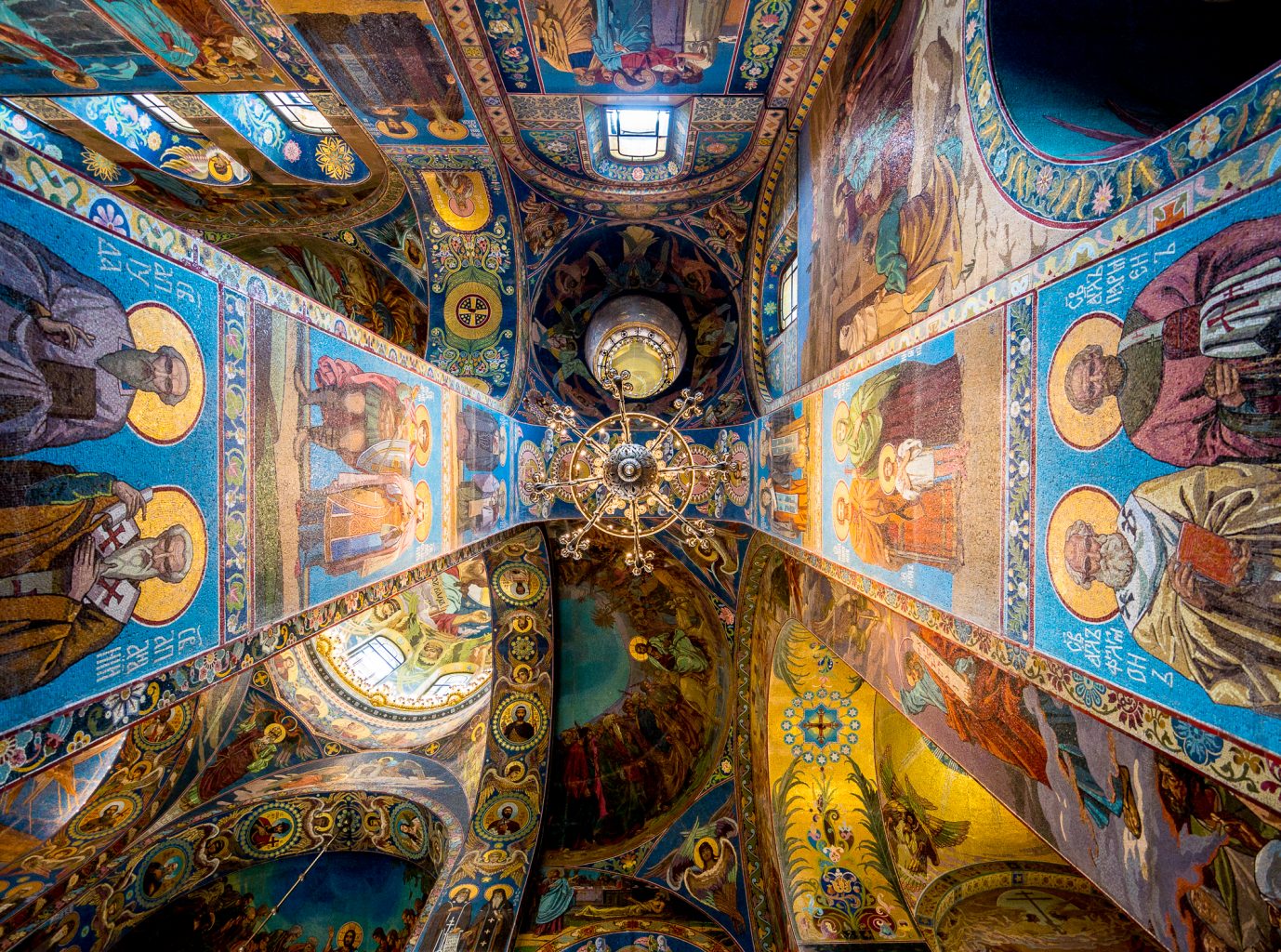 In the Church of the Savior on Spilled Blood, to get the most interesting photos and to appreciate the value of looking up, you need a combination of stillness and movement. Stillness to stop and to look up. Movement to make micro adjustments if you want to get images like some of these that require you to center yourself directly beneath the main element of the ceiling. You don’t have to do that if you’re not taking a photo, but it can still be a fun challenge to try, even without a camera.

See in a new way by looking up 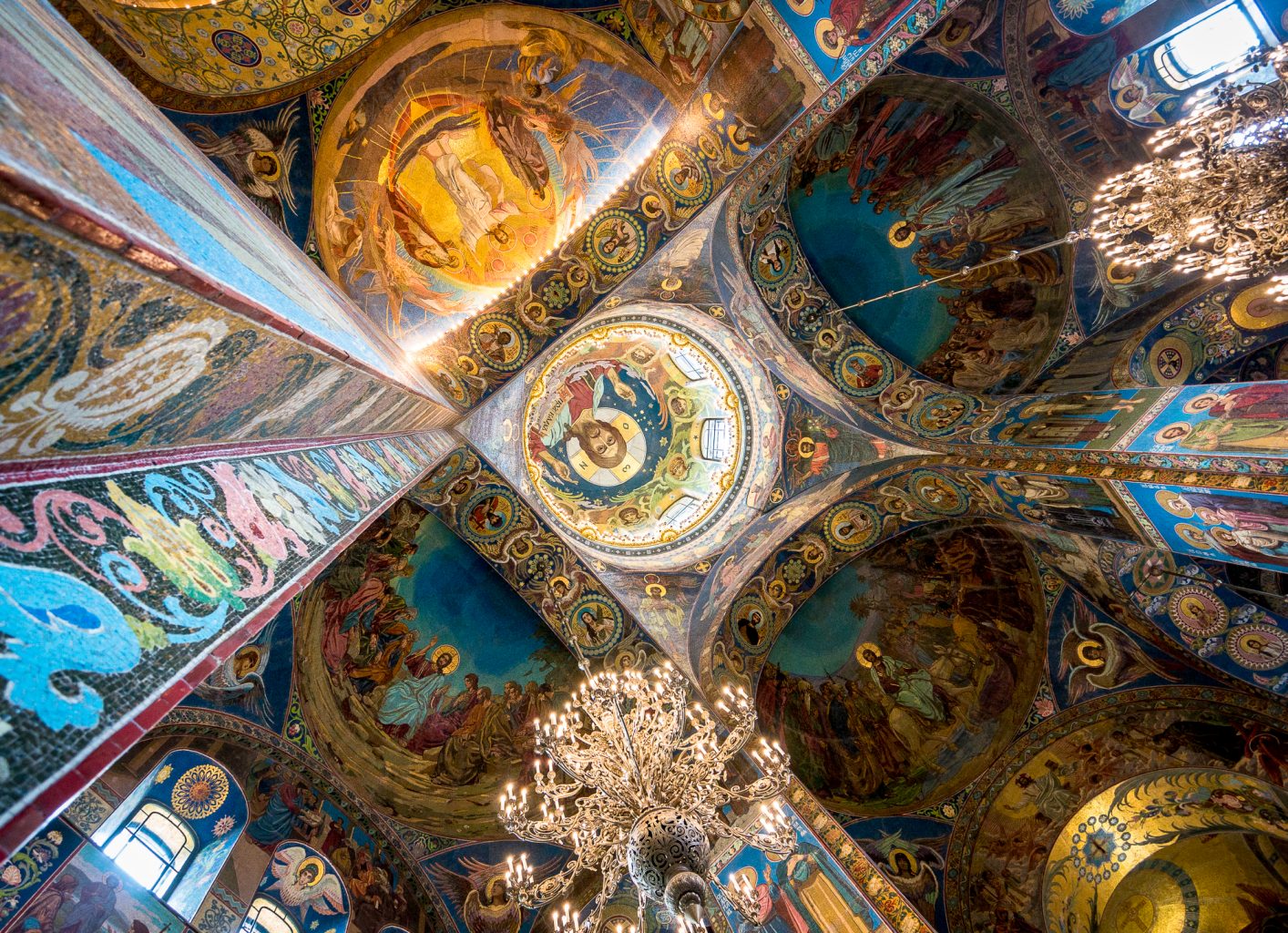 While looking up is the opposite of looking down, with both you cease to see things in terms of recognizable objects so much as design elements. You start discerning patterns, shadows and connections you don’t normally notice. For example, I have a greater appreciation for the church’s columns, as shown in the photo above, because I’m seeing them in a new way, foreshortened and part of an almost abstract design rather than as an architectural support.

You notice this shifting of how you perceive values and design elements most when you look directly up or down and not at an angle but even looking up at an angle has its rewards. Notice in the following images how the shot that shows the walls and columns from the ground up has a very different feel than the ones shot directly up. You’ll never experience that difference unless you look up. 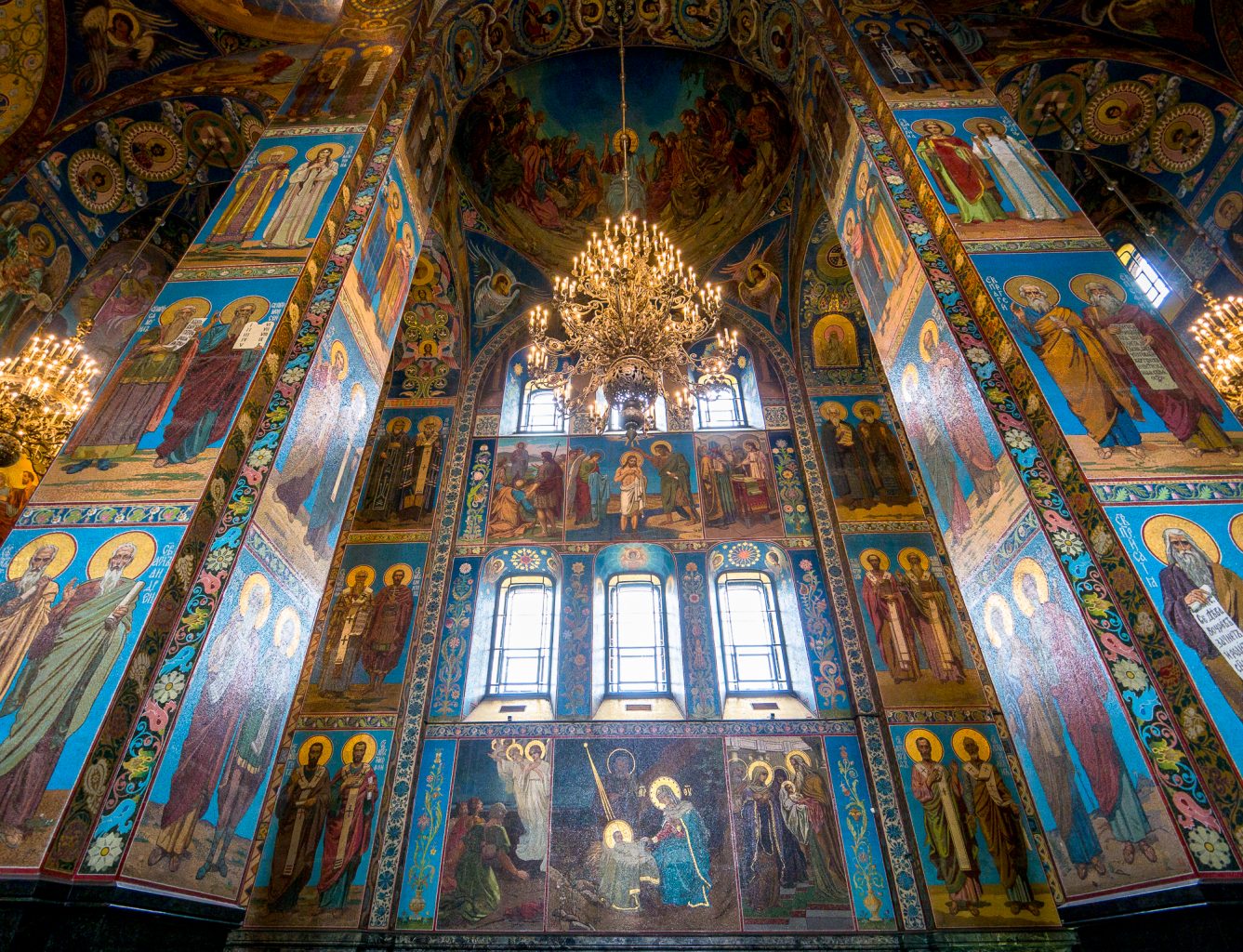 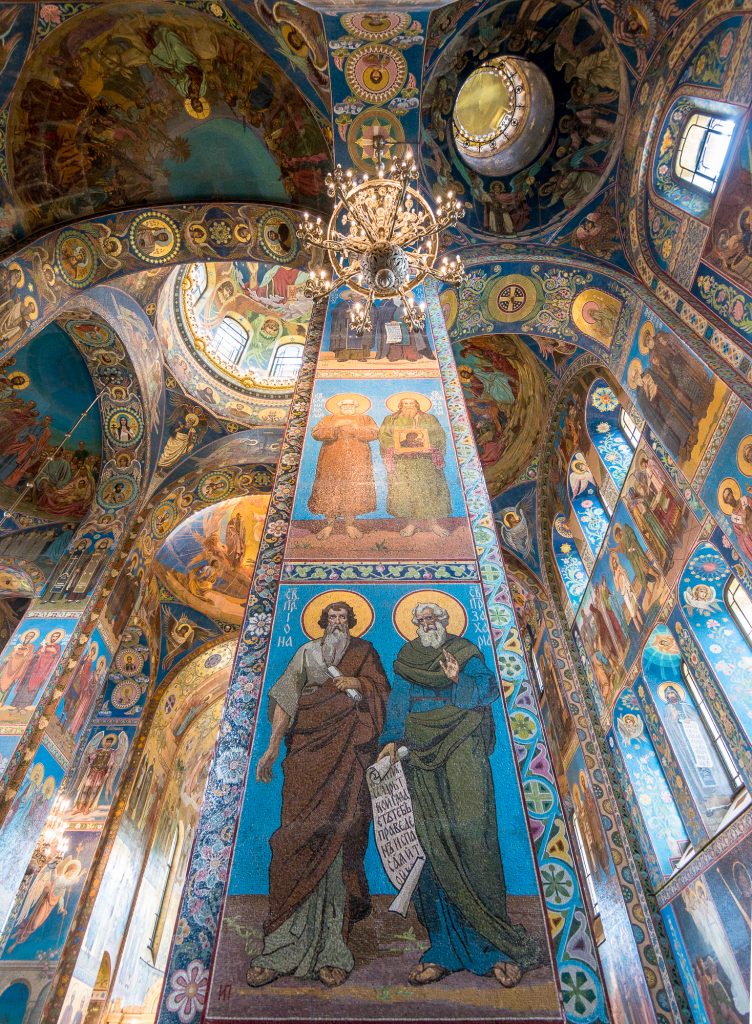 Look up with your camera

When taking photos in places like the Church of the Spilled Blood, it helps to have a wide-angle lens when you look up. Often such lenses distort the image in the corners but in this case, it actually adds to the effect, bringing the whole scene together. You can try making panoramas as well if you don’t have a wide-enough lens, but be aware that distortions in making the panorama can occur in surprising ways such as in the first image below. One thing this shot does show, however, is just how crowded this place can be. Which is another benefit of looking up: Even in a jam-packed location, you can usually get unobstructed images by simply pointing your camera up. 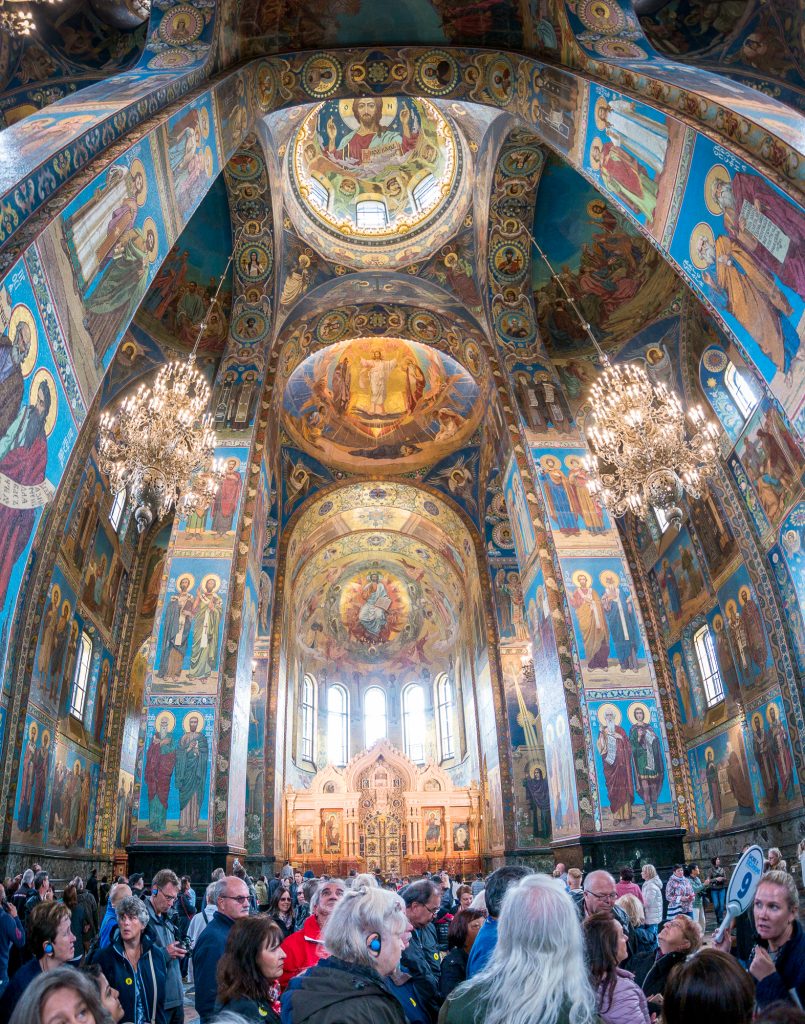 Not all panoramas come out the way you want. This one distorts the curves but shows how crowded the place gets. 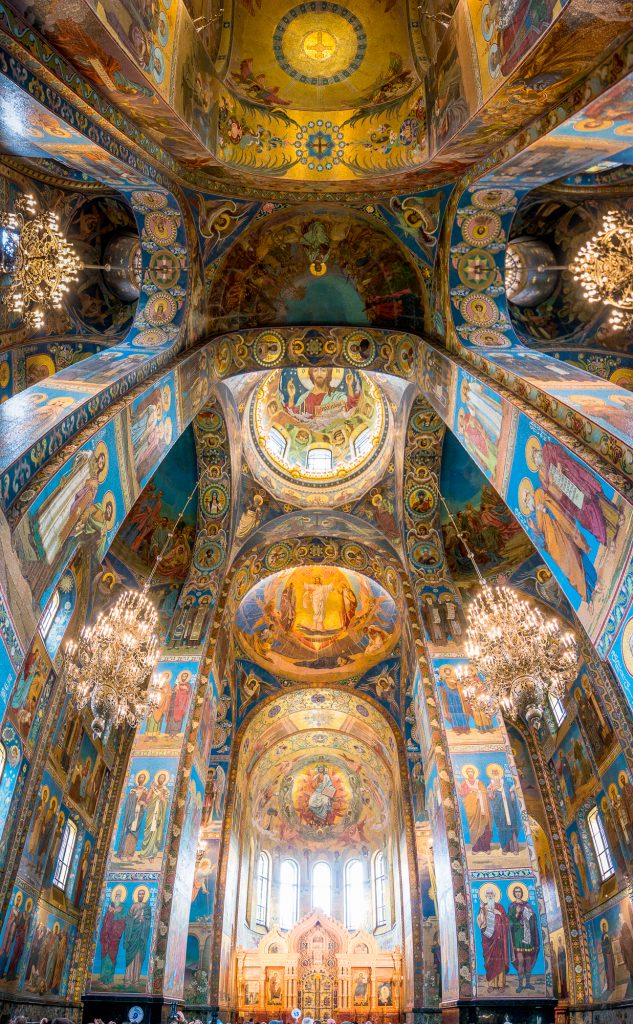 This is a vertical panorama made from five separate photos.

Enjoy the journey up

Finally, sometimes looking up not only reveals what is directly above you, but all that leads up to that as in this image below. In this case, you get the best of both, the mosaics that guide your eyes up to the ceiling and then the ceiling itself. It’s like getting a bonus prize, such as the free rutabaga peeler with your Ginzu steak knives. And all you have to do is look up. 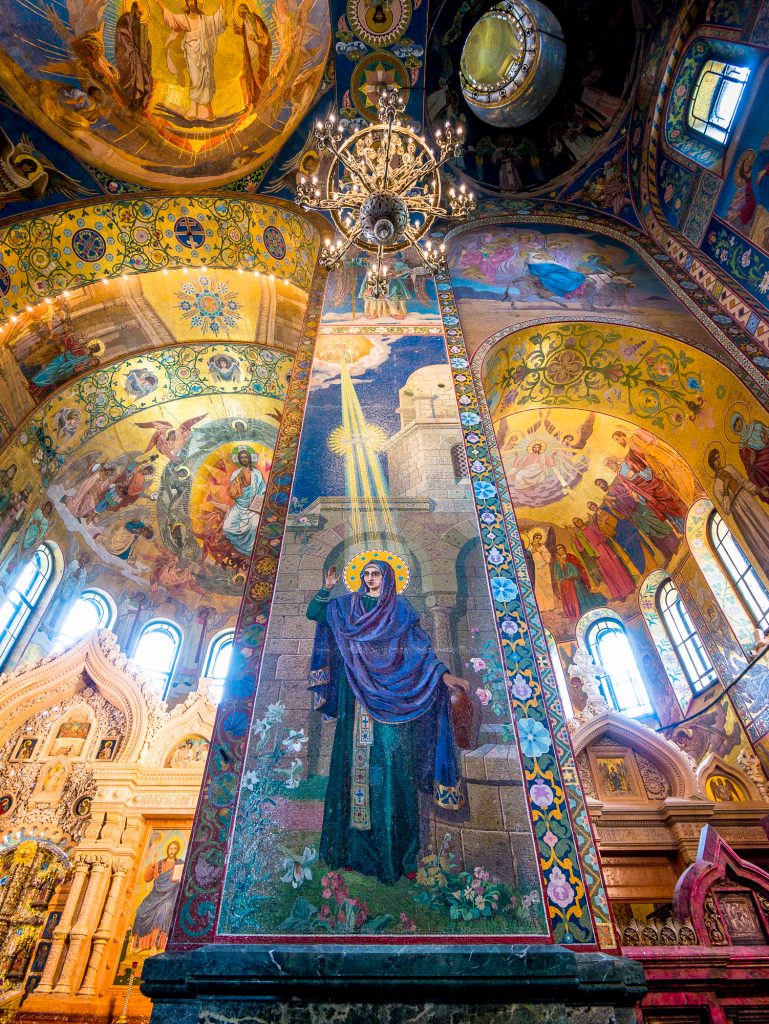