Home Explorations Travel Buchenwald: Why you should visit a former concentration camp

Buchenwald: Why you should visit a former concentration camp

The value of discomfort

It’s easy for me to use travel as a means of escape, pursuing fun places where I forget about work and the worries of home. Yet I’ve also come to appreciate how my times of greatest personal growth occur not during the easy moments, but when I step outside my comfort zone. New lands and unfamiliar cultures will do that for me. But so too will putting myself in situations that bring about discomfort in other ways.

This is why, in part, on a recent trip to Germany, my wife and I decided to visit the Buchenwald Memorial, site of the first and largest concentration camp in Germany during WWII.

Located just outside of Weimar, the cultural epicenter of the country, Buchenwald was also used after the war by the Soviet secret police for their prisoners. Today, little remains other than sections of the original fence, the entrance gate, the foundations of the barracks and the crematory where they burned the bodies of some of the 56,000 people who died there.

These scant reminders, combined with a visitor center filled with emotionally devastating artifacts and stories, are more than enough to give you a sense of the horrific tragedy that happened to over a quarter of a million inmates there.

I came knowing the place would affect me emotionally. But I wasn’t prepared for the surprising ways it did that. 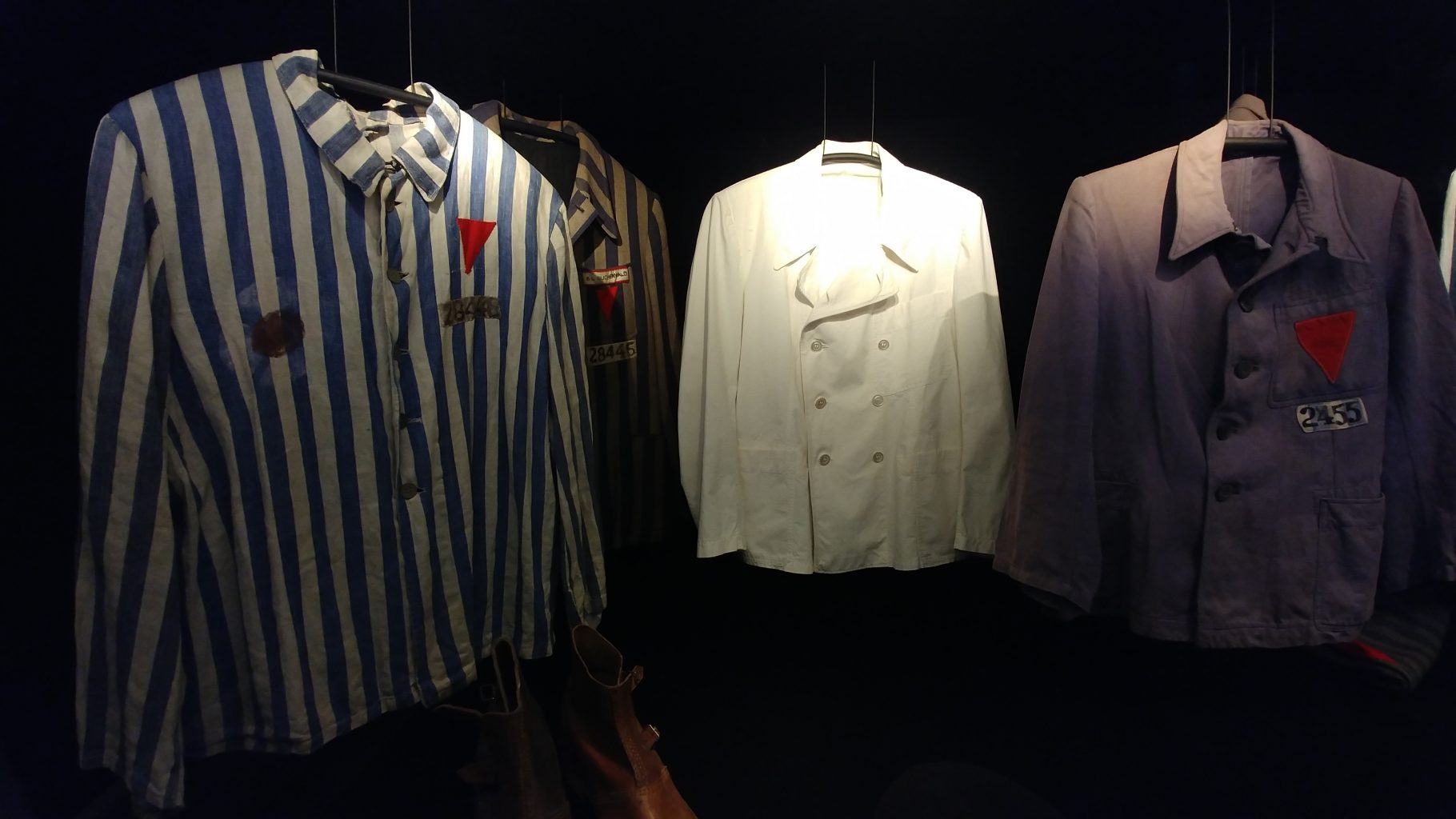 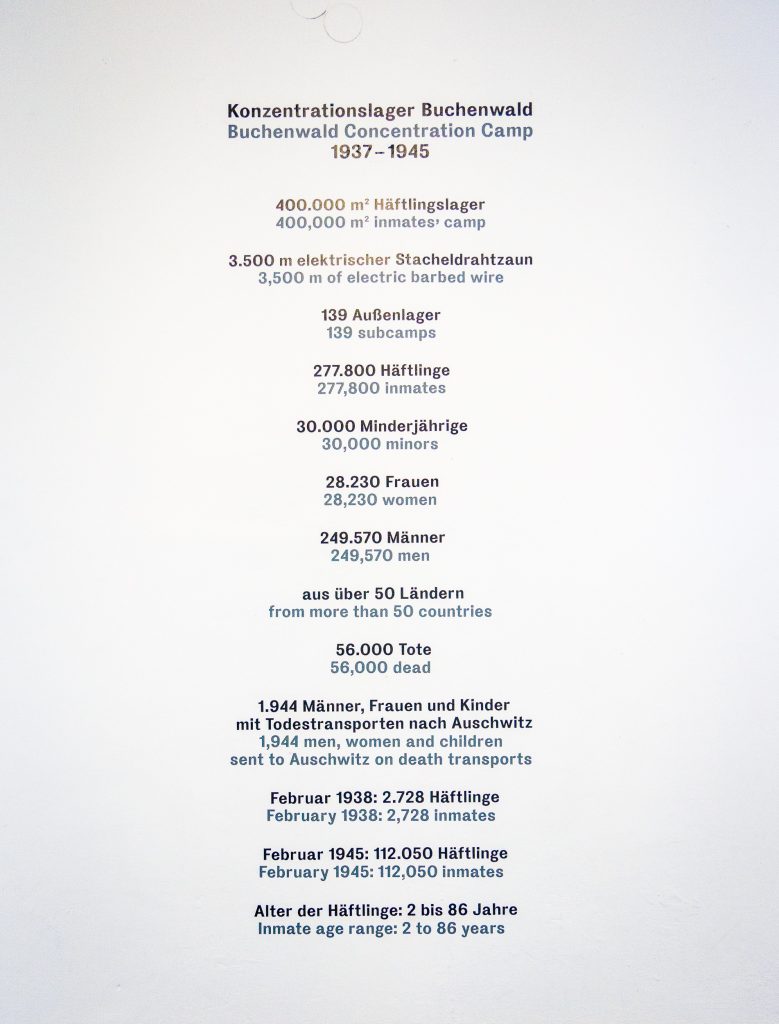 I expected to confront the evils of the past. But what I faced was more than history. The same forces that led to such horrors are still at play today, all around me. And here’s the scary part: Maybe within me.

For example, for all the atrocities described in the exhibit, it wasn’t just what the SS and Gestapo did that wrenched me. I anticipated reading about their appalling deeds. What I hadn’t foreseen was how hard it would hit me to learn of the “ordinary” people of Germany – people like me – who chose to look the other way in the case of the concentration camps.

An elderly German friend of mine who lived through WWII recently told me, regarding the concentration camps, “We had no idea.” She resided far from any of the main camps, so I wanted to believe her. But her response was the same as that stated by the local townspeople when the Allied forces liberated Buchenwald in April, 1945. “We just didn’t know,” they said. And yet, the evidence indicates otherwise.

Many of the prisoners from the camp were forced to work in local factories, side by side with the town citizens to build armaments and other products for the war effort. Upon liberation, the prisoners informed the British, American and Canadian forces that they had told the townspeople what the conditions were like. Plus, all you had to do was look at the emaciated bodies of the prisoners to know something about the desperate conditions in the camp. But still, these same locals repeated their excuse long after the war: “We just didn’t know.” They intentionally chose to look the other way and do nothing. 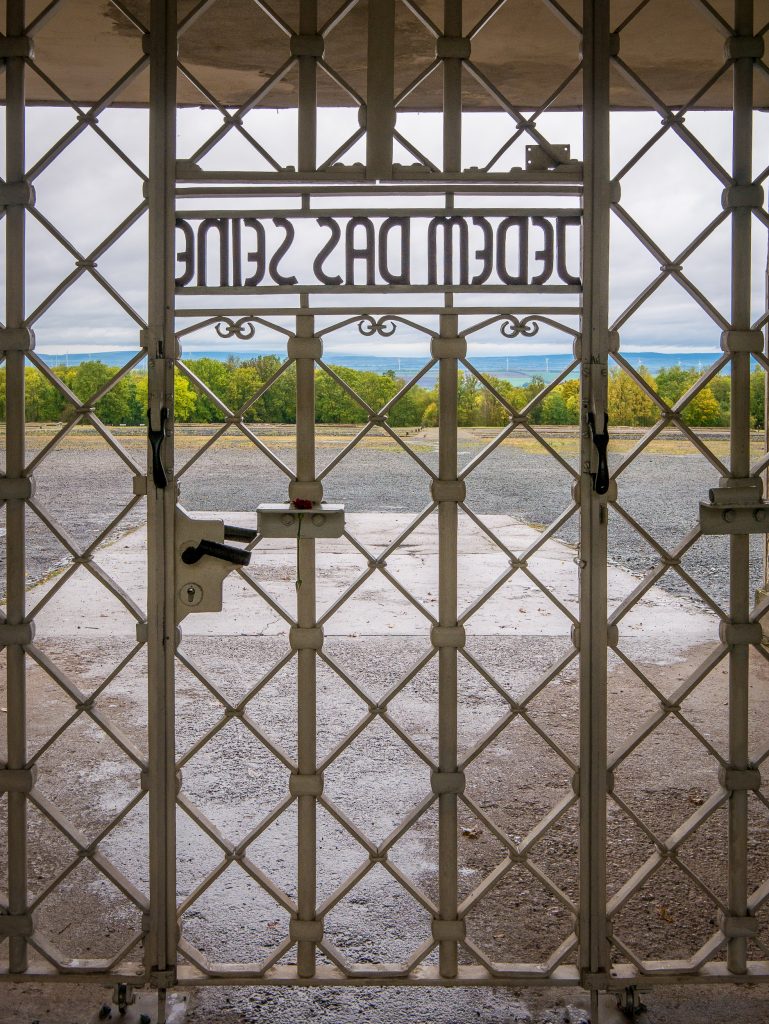 This phrase, “Jedem das Seine” means basically, to each his own. It was twisted by the Nazis to imply that all the prisoners were there of their own doing.

Asking the hard questions from Buchenwald 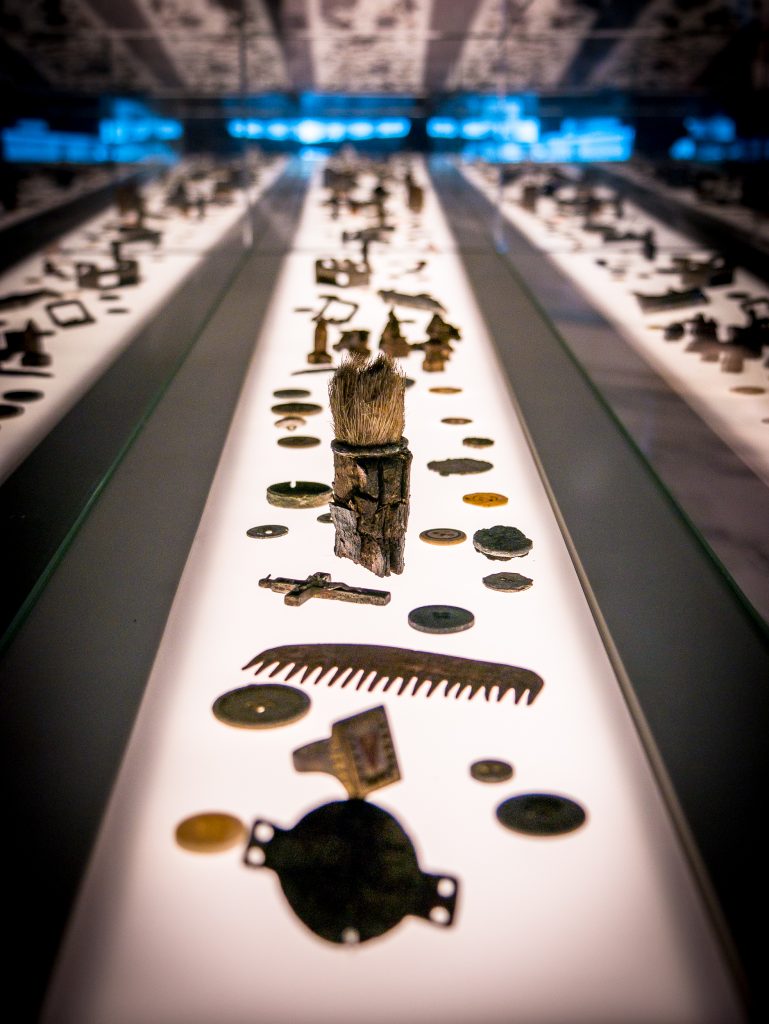 Personal items taken from the prisoners at Buchenwald 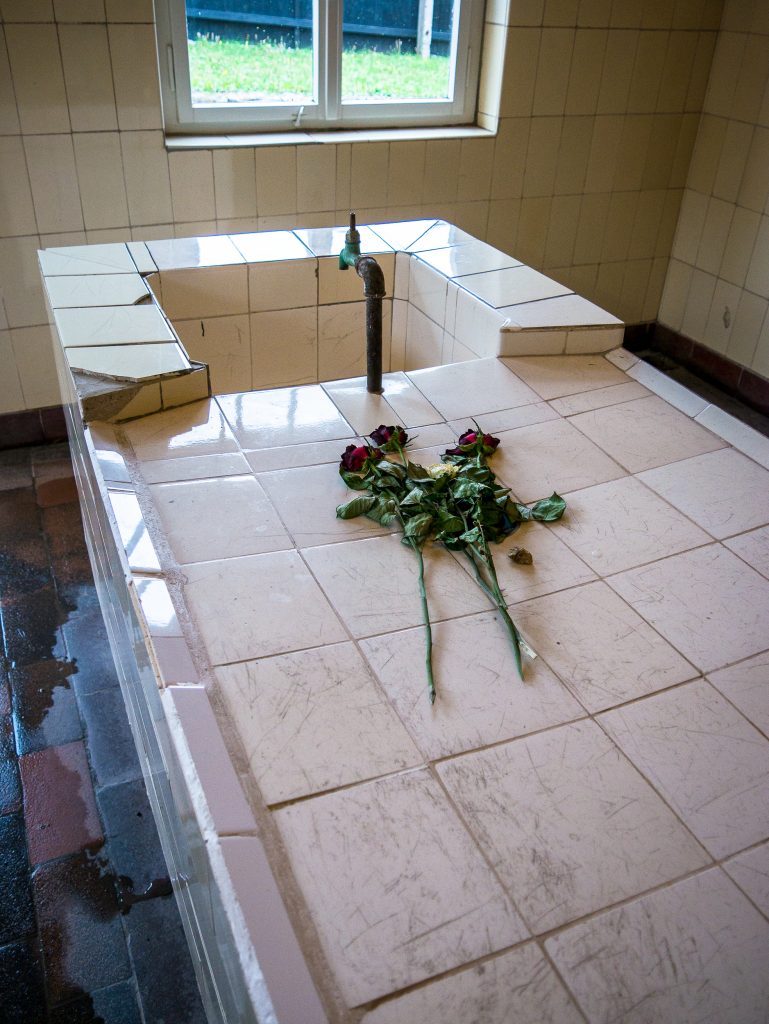 Living with the truth

The awareness that within me lies the capacity for great courage but also great cowardice, however, was only half of the surprising lessons from Buchenwald.

The other aha came from a recognition of just how interconnected we all are. I didn’t just read stories of Jews, Poles, Communists, Roma and others imprisoned there. I read of people like me thrust into horrific situations. How they suffered. How some overcame. How all were affected in ways beyond anything I’ve ever experienced. I left Buchenwald with a poignant sense of shared humanity, of identification with people who are more like me than unlike me. That’s something that the Nazis could never see. They sought to demonize and dehumanize others. But a trip to Buchenwald made me appreciate on a visceral level just how wrong that is, both then and now.

I walked away with this odd combination of bone-deep sadness, unexpected connection and a moral outrage tempered in my judgments against others by the realization that I could easily have been one of those others – on either side of that barbed-wire fence.

It’s hard to explain this complex reaction. Which is why I encourage everyone who plans to travel anywhere near the location of a former concentration camp to make the effort to visit one of these memorial sites. To see. To better understand. To not forget. And to not let anyone else forget either.

Traveling to places such as Buchenwald isn’t fun. But sometimes we need to go to the dark places, in our world and in ourselves, to remember how much light there is. And to bring that light ever forward. 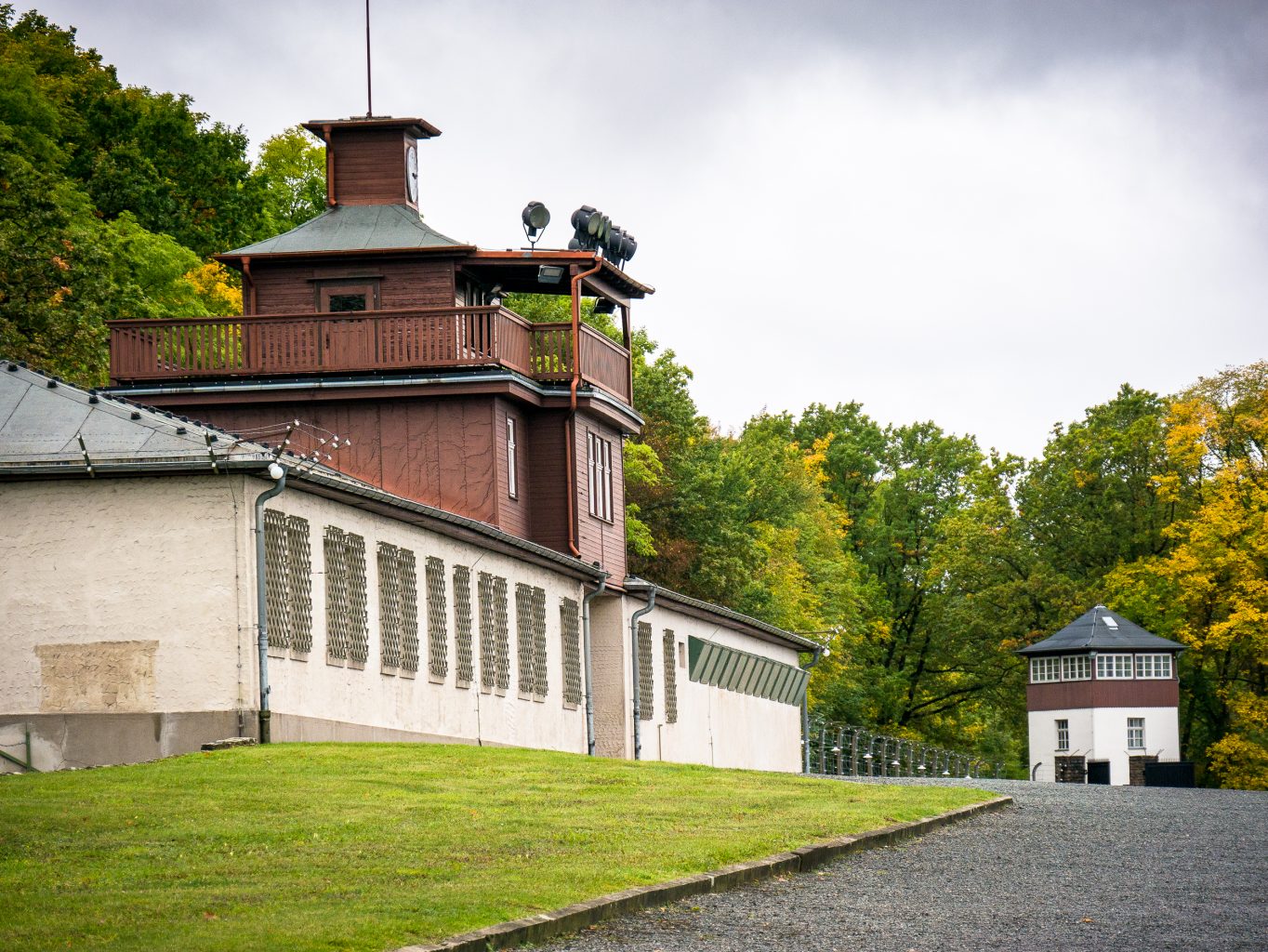 This is a very different take on the topic of Looking the Other Way, but it shows just how many ways there are to see the world differently. And why even difficult places such as Buchenwald help us to grasp the world we live in, both the good and the bad, the world around us and the world inside us. You can read other entries in this series here:

Look the other way: Kirkjufell, Iceland

Look the other way: Church of the Savior on Spilled Blood, St. Petersburg, Russia